ECB: Digital euro to be attractive, not redundant

The European Central Bank (ECB) will ensure its digital euro is attractive enough for users so it won’t be swept aside by other private means of payment, Executive Board member Fabio Panetta said on Friday, according to Bloomberg.

The Central Bank is examining together with the European Commission a broad range of policy, legal and design questions, including the possible effects of awarding the digital euro legal-tender status.

Currently, only euro coins and banknotes must be recognized as a means to settle a debt in the euro area.

Panetta argued that for the digital euro to be successful it would have to be widely accessible and cheap to use for both consumers and merchants. He pushed back against arguments that central bank digital currencies, or CBDCs, will be “redundant” amid private-payment alternatives such as credit cards, apps and stablecoins.

“Central Bank money provides the reference value for all other forms of money in the economy,” stated Panetta.

The ECB is likely to be among the first advanced-economy central banks to issue a digital form of its currency, with officials pointing to the middle of this decade for a possible rollout.

The bank is currently exploring the project and hasn’t yet made a formal decision on whether to launch a digital euro.

While the ECB has floated ideas for how it will prevent the digital euro from becoming so successful that it crowds out private-sector actors, Panetta said “we need to devote just as much attention to the risk of it not being successful enough.” 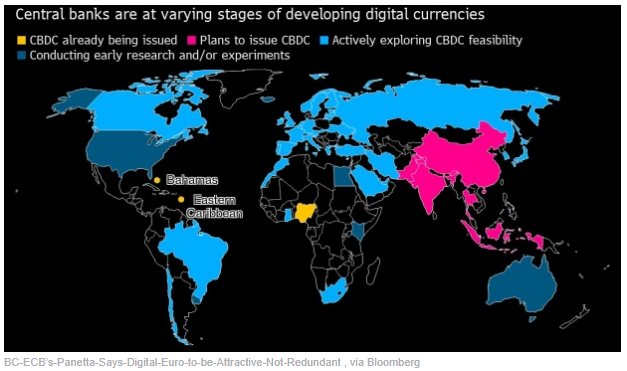