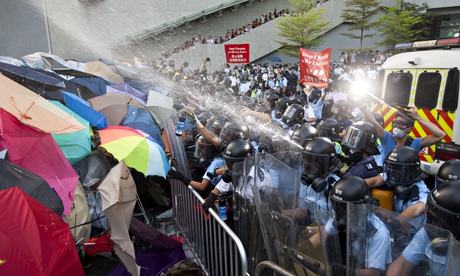 Leung Chun-ying: “I ask that they keep their promise and immediately stop their campaign”

On Tuesday, the head of the Executive of Hong Kong asked the pro-democracy movement, Occupy Central, to “immediately” end the manifestations which have been disrupting the functioning of the financial center of this Chinese city for three days, France Presse reports.

„The Occupy Central founders have repeatedly said that if the movement becomes uncontrollable they will end it. I ask that they keep their promise and immediately stop their campaign” declared Leung Chun-ying, after the clashes on Sunday night between the protesters and the riot police, who tried to disperse them by using tear gas.

The students who stormed into the Government building on Friday have been, for several weeks, the promoters of a civil disobedience campaign to denounce what many locals see as a growing takeover of the local services by the central government.

According to AFP, Beijing announced in August that the future head of the local executive will also be elected by universal suffrage in 2017, but only two or three candidates selected by a committee will be entitled to be present in the election.

The pro-democracy movement Occupy Central asked for the “withdrawal” of Beijing’s decision and for a revival of the process of political reforms. In case of rejection „the movement will intensify”, it warned, according to the French news agency.