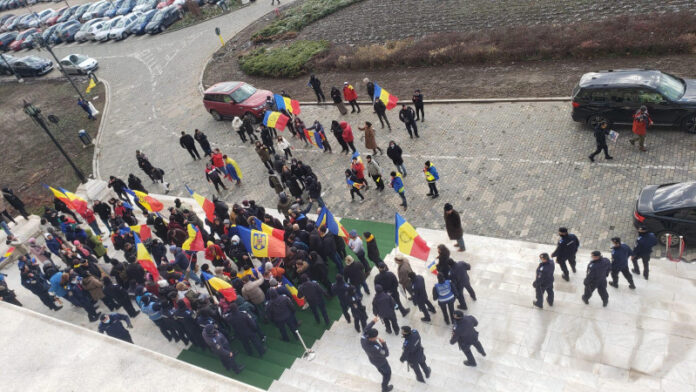 The President of the Chamber of Deputies in Romania Daniel Suciu announced that protesters were vandalizing cars in the courtyard of the Palace of the Parliament in Bucharest on Tuesday which belonged to the Ambassador of Japan and the Ambassador of the USA in Romania, according to some judicial sources.

Protesters threw paint on the car of a PSD senator. George Simion, a member of the Chamber of Deputies of Romania claims that the people in the car showed signs to the protesters to incite them.

AUR protesters entered the courtyard of the Palace of the Parliament after surrounding the building and forced their way into the Senate after they managed to cross over.

“In the end, we went through an extremely unpleasant moment, which may have some unpleasant echoes – the inability of the Ambassador to leave. With the help of the SPP, the gendarmes and those in the protocol, we managed to secure security for the safe exit of the ambassador,” said Corlățean.

MPs barricaded inside the building and those who managed to forcefully enter the Parliament’s courtyard, risk up to two years in prison.

AUR’s co-president Claudiu Târziu went out to the protesters in front of the Senate and claims that they were allowed to enter the courtyard, precisely so that later the gendarmes could violently repress the protest.