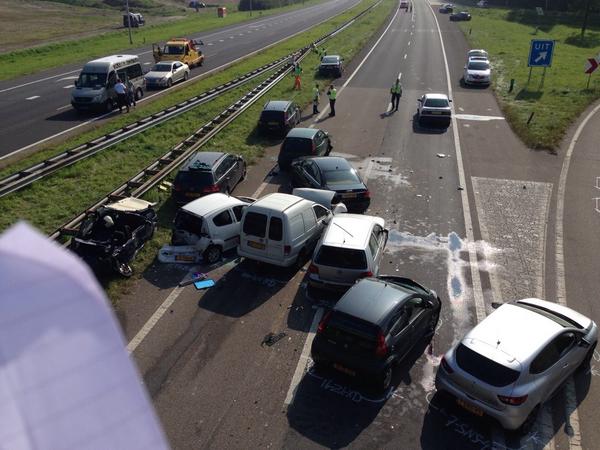 Netherlands: Two dead and 26 injured following a collision of 150 vehicles

Approximately 50 ambulances were sent to the crash site, along with a medical helicopter

On Tuesday, at least 150 vehicles were involved in a chain accident because of the fog on a highway in the Netherlands, causing the death of two people and injuring another 26, Dutch authorities announced, according to AFP.

The collisions occurred during rush hour on both directions of the A58 highway, near the Heinkenszand village, between the towns of Goes and Middelburg.

According to a provisory report, two people have died, said Esther Boot, spokesman for the local police department. „Also, there are 26 injured, some of which are in critical condition”.

Approximately 50 ambulances were sent to the crash site, along with a medical helicopter, which initially had difficulties because of the fog.

„We were driving slowly because of the reduced visibility and, suddenly, we found ourselves in front of a wall of fog” said Inge Geldof, a witness that was not involved in the collisions, quoted by the NOS Dutch public television. “Fortunately, I was able to brake in time” he added.

Several witnesses quoted by NOS stated that some drivers were travelling at speeds of 120-130 km/h with the headlights turned off. “You couldn’t see 50 meters in front of yourself and yet there were some who were still overtaking others at high speed”, declared a witness to the Omroep Zeeland TV station.

According to Dutch media, the ambulance staff had to walk to some of the injured, because of the crashed cars that were blocking the road.