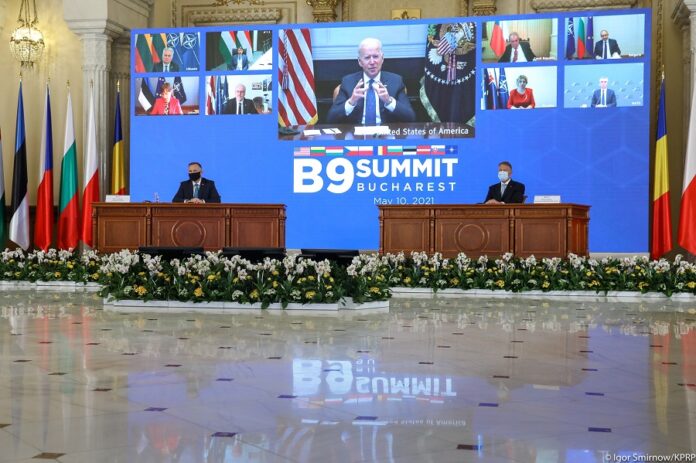 Romanian President Klaus Iohannis and Poland’s President Andrzej Duda on Monday, on the occasion of the B9 Summit, said that there is a need for “stronger allied military presence,” including the US participation, in the southern part of the Eastern Flank, amid the worrying security situation in the Black Sea, according to Romania-Insider.

Iohannis stressed that “Russia’s destabilizing actions in the region” are worrying and contribute to maintaining a heightened climate of insecurity and called for Bigger NATO support for Eastern Partnership countries.

“The worrying security situation in the Black Sea has proven that we need to maintain vigilance, NATO must continue to strengthen its position of deterrence and defence, especially on Eastern Flank in a unified and coherent manner, from Baltic Sea to the Black Sea,” said Iohannis.

Duda appealed for continuing the NATO enlargement policy and explained that Biden in his speech confirmed the presence of US forces in the Eastern Flank, according to PAP.

“We also addressed the issue of regional cooperation within the Three Seas Initiative, with an emphasis on the implementation of strategic regional interconnection projects. From this perspective, we agreed to continue to promote with priority the Rail2Sea railway project, which will connect the ports of Constanta and Gdansk and respectively, of the Via Carpathia road project,” said Klaus Iohannis.

Duda explained that apart from improving the region’s infrastructure, these projects are important for security and explained that there is a possibility of a faster relocation of troops, not only by air but also by rail or road transport and stated that no one should doubt the significance of the projects.

“I’m pleased that our voice, the voice of unity, was once again heard from the Bucharest Nine (B9) countries,” said Duda.

The B9 summit is a Romanian-Polish initiative aimed at coordinating the security positions of countries on the Eastern NATO Flank.