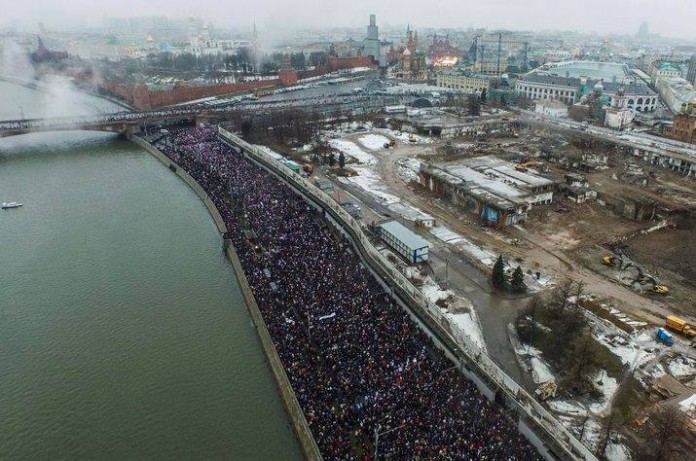 Thousands of people attended the march organized in Boris Nemtsov’s memory, who was killed on the night of Friday to Saturday in the center of the Russian capital, and gathered in Slavianskaia Square in downtown Moscow

According to the Tass agency, who is quoting the police’s press service, approximately 21.000 people participated in the Sunday march, while the authorities issued a permit for 50.000 people. A member of the opposition stated that the number of participants was approximately 50.000.

The people marched from the Kitai-Gorod metro station to the Bolshoi Moskvoretski Bridge, where the Russian opposition leader was killed. Participants were bearing portraits with Nemtsov, flags and banners. The demonstrators also visited the crime scene, which was surrounded by police officers.

Former Russian Prime Minister Mikhail Kasyanov, co-chairman of Nemtsov’s RPR-Parnas party, gave a speech at the crime scene, in which he suggested that the bridge should be named Nemtsovski, in memory of the Russian opposition leader.

Police prevented a group of approximately 10 nationalists who were wearing imperial flags to join the march, but made no arrests. Instead, Ukrainian deputy Aleksei Goncearanko, accused by Moscow of involvement in the Odessa violence of May, 2014, was detained while trying to join this manifestation. He is to be referred to the Russian Committee for Investigations, according to the Capital Police.

A commemoration march, attended by 6.000 people, also took place in St. Petersburg, while smaller demonstrations were held in other Russian cities. The commemoration march is replacing the Spring March planned by the opposition on Sunday, cancelled due to Nemtsov’s death. A few hours before being shot, Nemtsov asked the people through a radio station to participate in many numbers in the Spring March.

The politician was shot several times on Friday, before midnight, while walking on the Bolshoi Moskvoretski Bridge in the company of a woman.