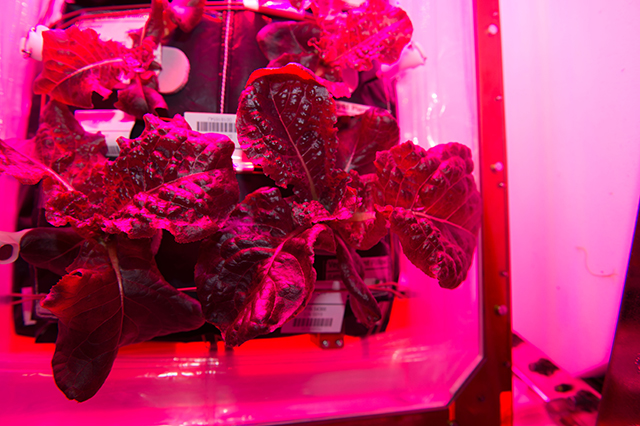 Astronauts on the International Space Station have been growing romaine lettuce, and will soon be enjoying a salad made out of it. This is the first time that humans grow plants outside of Earth’s atmosphere.

The microgravity-grown plant will first be washed with a citric acid sanitizer before becoming the astronauts’ meal.

The plant isn’t green, but red, so the astronauts funnily dubbed it outREDgeous. Half of it will be consumed in space, and the other half will be sent to Earth for analysis.

Growing plants in space was not an easy task, since there’s no gravity to hold the dirt together, or the water in the dirt, and even to keep the roots growing as they should, since there’s no ‘up’ or ‘down’ in space. This problem was dealt with by using ‘pillows’, special bags filled with seeds, dirt, water, and rods that guided the growing paths of the roots and plants.

Fresh food protects against radiation, and that isn’t the only benefit of growing vegetables in space. A NASA behavioral scientist declared that taking care of plants would significantly lower the astronauts’ stress level.

It seems that NASA is getting closer and closer to the point where self-sustained life on Mars is becoming more of a reality than ever before.