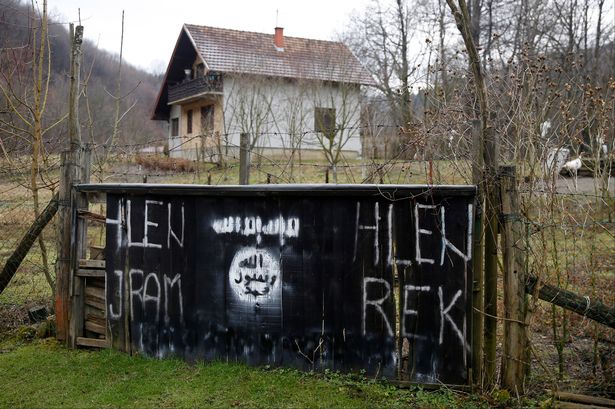 An investigation by the Sunday Mirror revealed that a small village in Bosnia might be an ISIS stronghold. Terrorist are reportedly buying land in a woodland area and using it as training camps. Photos at the entrance of the town show ISIS markings, and the journalists who were there stated that the people from the town “wore Islamic-style clothing, including two women wearing burkas.”

Around 12 jihadists have apparently trained there and left for Syria, five of which have been killed in the battles.

From this village (Osve) a large number of people went to Syria and are going constantly. The chosen location of some of the properties is on a hill, where there is no possibility to approach without being seen. It is clear that the source of the terrorist threat is right there. It is a major threat. There is no one there who isn’t ready to respond to the summons to jihad – Dzevad Galijasevic, terrorism specialist

It is believed that Bosnia was chosen due to its ideal positioning, which makes it easy to get to from Syria, through Turkey, Macedonia and Serbia. Another reason would be that guns are relatively easy to be obtained, “due to illegal ownership following the conflicts of the 1990s.”

Bosnian special security forces are doing their best to prevent things like these from happening.

The return of individuals participating in the conflict in Syria, fighting with ISIS, is undoubtedly a security challenge and a threat, the extent of which is hard to determine. Sipa (State Investigation and Protection Agency) continuously performs checks of all allegations that can be linked to terrorist activities in any way, whether that is financing, recruiting or other activities related to terrorism. – Kristina Jozic, Sipa spokesperson

Mrs. Jozic also added that the small village has been under surveillance since May.