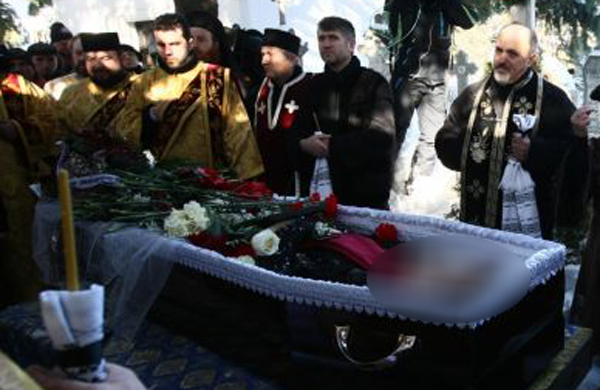 Funeral, only with a fee: 500 lei, the charge imposed by a priest for a service

A priest from the village of Girugita, Dolj, refused to bury a deceased villager because the family did not have 500 lei to pay the “price” of the service. That is why the family had to keep the body in their home for four days, until they got the money.

On the funeral day, the relatives and the people in the village waited the priest for hours. The deceased’s grandson, Gheorghe Tugui, declared that the priest showed up after 14.00, when he received the money.

He’s not coming. I must give him the money before, and only after he will perform the funeral service. And I told him – I’m staying with the people in the rain. I sent him 2 and a half million (ROL) before.       He said he’s getting dressed and he’s coming

Although representatives of the of the Archdiocese of Craiova claim that there is no such thing as a funeral tax, the priest declared for the Digi24 channel that he doesn’t do voluntary work.

Reporter: – You asked him for 500 RON before the service?

Reporter: – Is that how it should be done?

Priest: – Yes, that’s how it should be done. Isn’t it normal?

Reporter: – Did you receive the money?

Reporter: – Why are they saying that you were late?

Priest: – Well I don’t know, when the money was brought to me, I came.

After learning that the situation was public, the priest issued a receipt for the money he received from the deceased’ nephew. So, according to what was written on the receipt, 250 RON cost the funeral, the contribution to church – 120 RON, candles and incense – 30 RON and the church repair – 100 RON. In total, 500 RON.

The representatives of the Craiova Archdiocese began a series of investigations in the case.