„Parade” of the Islamic State equipment: Jihadists are threatening that they „will conquer Rome”. VIDEO 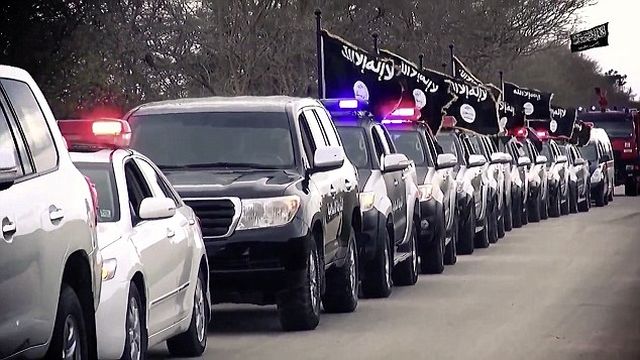 The Islamic State (IS) Sunni extremist group, which has recently strengthened its control over cities in northern Libya, organized a parade of 40 cars, with this opportunity asking Benghazi residents to swear their allegiance to leader Abu Bakr al-Baghdadi, according to Daily Mail.

In the video, about which Daily Mail claims it was published on the Libyan side of the Sunni extremist group – Ansar al-Sharia – it can be seen how several Toyota Land Cruisers, with the signs and flags of the Islamic State, are driving in unison on the streets of Benghazi.

The parade is acclaimed by numerous men, women and children.

Ansar al-Sharia declared the city of Benghazi an “Islamic emirate” in June, 2014, and three months later swore allegiance to the Islamic State terrorist group. The Libyan side of the IS is considered responsible of killing US Ambassador Cristopher Stephens in the 2012 attack on Benghazi.

On Sunday, a video of the IS was showing the beheading of 21 Egyptian men of Christian denomination, recently kidnapped in Libya.

According to Daily Mail, after the Egyptian authorities announced that they had bombarded positions of the terrorist group in Libya, in the city of Derna, to avenge the death of the 21 Egyptians, the Jihadists took revenge by capturing another 35 Egyptians, who they might execute soon.

Since August, 2014, Ansar al-Sharia has strengthened its control of cities in northern Libya, Mediterranean Sea Ports, such as Sirte, Nofalya, Derna and Benghazi, Abu Bakr al-Baghdadi naming Ali Al-Qarqaa as leader of the area.

Three years after the ousting of the former Libyan leader, Muammar Gaddafi, the major cities of the countries have fallen prey to several extremist groups, as Ansar al-Sharia, Libya Dawn and Islamic Youth Shura Council, which then swore allegiance to the IS. The terrorist group, that has already conquered important areas of Iraq and Syria, is trying to take advantage of Libya’s position in order to threaten Europe.

According to Daily Mail, in the IS video in which the 21 Egyptians are beheaded, the jihadists threaten that they “will conquer Rome”, and in the images you can see how the water of the Mediterranean Sea is full of blood.