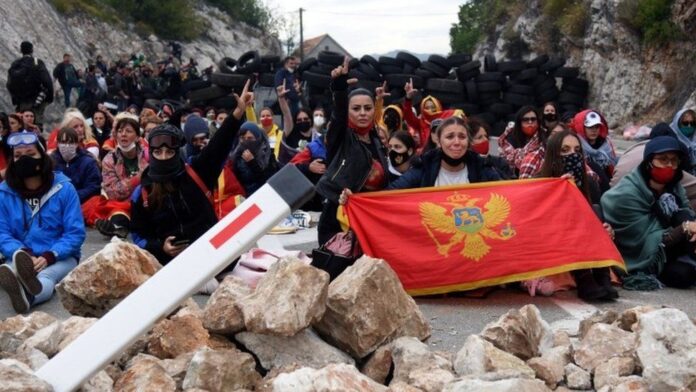 Violent confrontations in Montenegro, as the Serbian Orthodox church installed a new leader

Fierce clashes took place in Montenegro on Sunday, as the Serbian Orthodox Church installed the new leader, Joanikije II, in a ceremony that exposed divisions in the Balkan country. Police used tear gas against protesters who threw rocks and bottles in the city of Cetinje.

Montenegro split with Serbia in 2006, but its church remains under the Serbian Orthodox church.

Most of the people, including Montenegro’s president, see it as a symbol of Serb influence.

President Milo Djukanovic had urged protesters to disrupt the inauguration of Joanikije II to the top clerical position, known as the Metropolitan of Montenegro and Archbishop of Cetinje.

On Saturday, hundreds of protesters set up barricades to block access to Cetinje and the demonstrations spilled into Sunday when the ceremony took place, according to BBC.

Police arrested more than a dozen people, including an advisor to the president. At least 20 people were injured, AFP reported.

“We’re on the barricades because we’re fed up with Belgrade denying our nation, and telling us what are our religious rights,” protestor Andjela Ivanovic told Reuters, referring to Serbia’s capital.

“All religious objects [churches] built in Montenegro belong to people here and to the state of Montenegro”, added the protestor.

Joanikije II and Serbian Patriarch Porfirije were flown in by helicopter for the ceremony.

President Djukanovic is still reeling from the defeat his Democratic Party of Socialists (DPS) suffered in last year’s parliamentary election, which came after he pushed through legislation which would have allowed the state to claim Church property.

The move backfired when the Church campaigned for the opposition, pushing the DPS from power for the first time in three decades.

Montenegrins who identify as ethnic Serbs account for about a third of the country’s 630,000 population, according to the latest census data. The majority of Montenegrins are members of the Serbian Orthodox Church regardless of ethnicity.