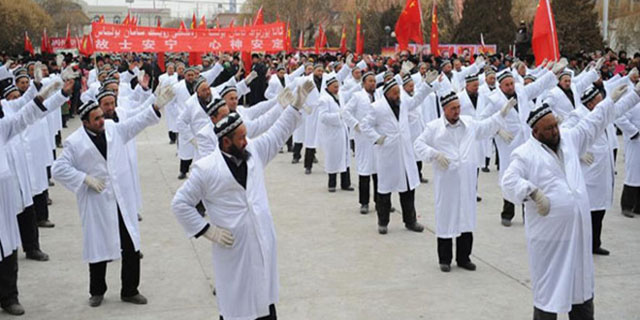 Uyghur Muslims are a minority in China which the Chinese Government represses in the name of counter terrorism. This has been criticized by human rights groups worldwide.

Several Uyghur Muslims were recently arrested for wearing beards, something seen as a terrorism sign by the CKP (Chinese Communist Party). The oppression doesn’t stop at men. Women are also banned from wearing burqas or hijabs. They are not allowed to board public transportation if they do not comply with the rules.

The latest attempt of the CKP to ridicule them took place a few days ago. Members of the Uyghur community were forced to dance in the streets of Xinjan and to swear that they won’t teach their religion to children. They were also obligated to tell children that praying harms their health.

“Our income comes from the CKP [Chinese Communist Party] not from Allah”. This is what they were made to change their slogan to.

Teachers have to instruct their pupils to stay away from religion on the grounds that it damages their health.

Instead of practicing religion, the CKP told the children to dance.