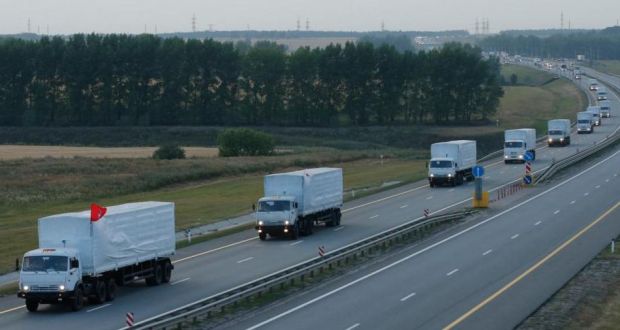 The Russian Ministry of Foreign Affairs denounced the Ukrainian “attempts” to block the “military convoy’s” transit towards the regions affected by the conflict in Eastern Ukraine.

The Russian Ministry of Foreign Affairs denounces the brutal intensification of the Ukrainian military operations in this region; these operations aim to block the route that has been agreed on with Kiev for the passage of the Russian humanitarian convoy.

The Ukrainian army has “destroyed” most of the Russian armored vehicles that entered Ukrainian territory overnight, stated a military spokesman.

„The Ukrainian troops located and attacked the military vehicles that entered through an insurgent-controlled area of the border overnight” said Andrei Lysenko, Ukrainian army spokesman.

On Friday morning, Ukraine denounced the incursion of a Russian military convoy on its territory, at a border pass point that was under pro-Russian separatist control in the Donetsk region. “A Russian military convoy passed the border through the Izvarin customs point” stated Oleksii Dmitraşkivski for AFP, a spokesman for the military operations in Eastern Ukraine. “We have no information regarding the number of vehicles in the convoy” he added.

According to correspondents of The Guardian and The Daily Telegraph publications, 23 armored vehicles for the transport of troops, fuel trucks and other logistical vehicles with Russian number plates crossed the border between Ukraine and Russia on Thursday night, through the Izvarin customs point.