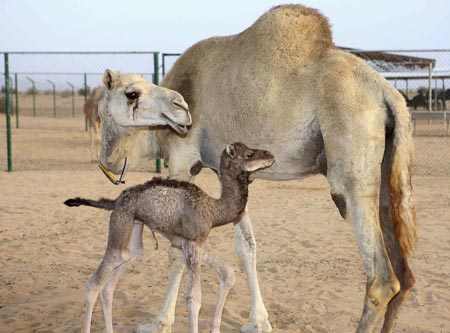 The world’s first cloned camel had her sixth birthday

She is also expecting a baby

The first ever cloned camel recently had her sixth birthday and is also pregnant. Injaz, meaning „achievement”, will give birth towards the end of 2015.

Doctor Nisar Wani of the Dubai Reproductive Biology Center is among the scientists who are very excited about this event. He stated that she conceived naturally and that this will prove once and for all the fertility of cloned camels and the fact that they can naturally reproduce.

Many other camels have been cloned since Injaz, and some even won races and beauty contests. A contest-winning camel is worth up to several hundred thousand dollars.

In an interview for Gulf News, Dr. Nisar Wani stated: „Cloning has great promise for potential gains in biomedicine for pharmaceutical protein production and for multiplication of genetically superior animals and increased production traits”.