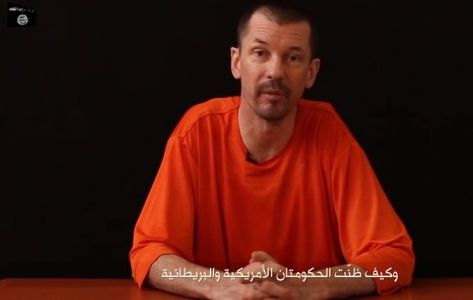 The Islamic State released a video of British journalist John Cantlie, who is being held hostage

John Cantlie was kidnapped by the Islamic State terrorist group after returning to Syria, in November 2012

The jihadists of the Islamic State terrorist group (IS) aired a video on Thursday of British freelancer journalist John Cantlie, in which he declares that he was kidnapped by the group after he arrived in Syria in November 2012, AFP reports.

In the video that was posted on Youtube, the journalist, who has worked with The Sunday Times, The Sun, The Sunday Telegraph and AFP, appears in an orange jumpsuit at a table, talking alone in front of the camera.

In the recording, journalist John Cantlie, who speaks in English, with Arabic subtitles, announces “future episodes” in which he will reveal “the truth about IS’s motivation”.

In the more than three minute long video no threat to his life seems to appear.

There is no clue about the recording date, but the hostage cites the war declared at the beginning of September by the United States with the purpose of defeating the IS.

At the beginning of the video he claims that he was kidnapped by the IS after he returned to Syria in 2012.

John Cantlie has been kidnapped before, along with a Dutch colleague, for several days in July 2012 by the Jihadists in northern Syria. The two were freed by the Free Syrian Army (FSA), at the time the main component of the Syrian rebellion.

In August 2012, John Cantlie declared that a part of the kidnappers were from the UK. “They were about thirty in total, approximately twelve spoke English, and nine had a London accent” he wrote in the Sunday Times. Cantlie said that he was blindfolded and threatened with death several times. “At one point they were actually sharpening knives for the beheading. It was terrifying” declared the journalist for BBC.

Since August, the Islamic State broadcasted three execution videos of two American journalists and one British humanitarian worker, in retaliation for American attacks on the organization’s positions in Iraq. The group also threatened with the killing of another British hostage, Alan Henning.