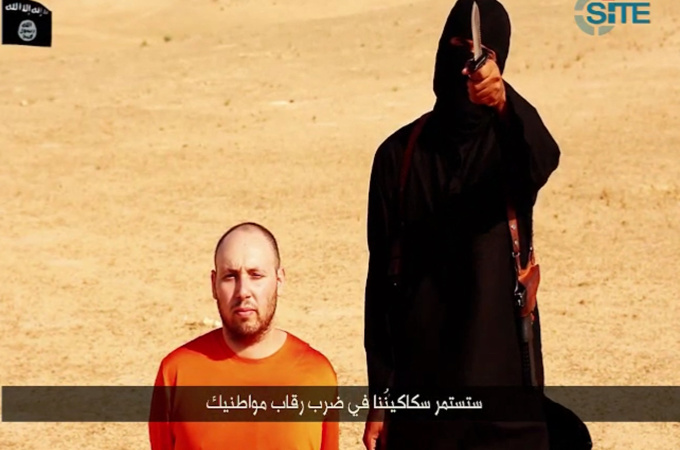 The IS claims the beheading of a second American hostage – VIDEO

„I’m back, Obama, and I’m back because of your arrogant foreign policy towards the Islamic State” said the man dressed in black

On Tuesday, the Islamic State, a jihadist extremist group, claimed the beheading of a second American hostage, journalist Steven Sotloff, declared the American Center for monitoring Islamist websites (SITE), according to Reuters and AFP.

In the video, entitled “second message to America”, journalist Steven Sotloff, aged 31, appears kneeling, dressed in an orange jumpsuit, along with a masked man that is armed with a knife.

The armed man, dressed in black, condemns the US intervention in Iraq and puts the knife at the journalist’s neck.

At the same time, the man launched a threat towards a British hostage, which he called David Haines, and warned the governments to withdraw „this evil American alliance against the Islamic State”, SITE specified.

„I’m back, Obama, and I’m back because of your arrogant foreign policy towards the Islamic State” said the man dressed in black.

The White House announced that it has yet to confirm the authenticity of this video.

The freelancer journalist Steven Sotloff was kidnapped in Syria in August, 2013. During a video message broadcasted by the Al-Arabiya channel on the 27th of August, his mother, Shirley Sotloff, appealed to the IS leader, Abu Bakr al-Baghdadi, to release his son.

On the 19th of August the jihadist group published a video in which they showed the beheading of another American journalist, James Foley. The group stated that Foley was killed in retaliation to American airstrikes against the IS.

The video was posted after the United States resumed the airstrikes in Iraq in August, for the first time since the end of the American military operation in this country in 2011, said Reuters.