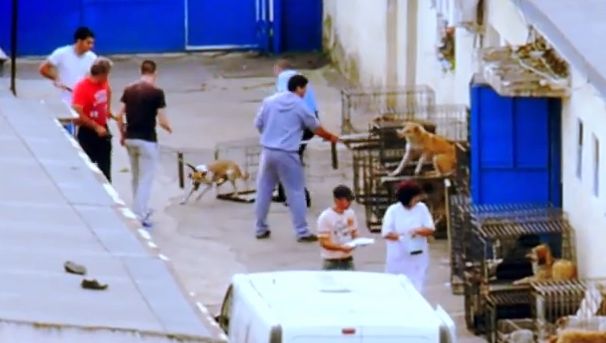 Stray dogs are being exterminated like flies in shelters in Romania. SHOCKING VIDEO

Their remains are left among the living animals

Stray dogs from the shelters in Romania are being killed like flies in conditions beyond imagination. A video documentary made by journalists from the RISE Project shows just how horrible the dogs collected from the streets are being treated.

In Ploiesti, for example, dogs die of „natural causes”, far away from the cameras, because filming and photographing is prohibited at the local shelter. According to the authorities, last year, out of 2.445 stray hounds captured by dog catchers, which are paid by the residents of Ploiesti, 1.370 (more than half) died of natural causes, while 297 other quadrupeds were euthanized.

This year also, „natural death” continues to strike the stray hounds managed by the dog catchers of Ploiesti: from January to May 2014, 639 died of natural causes out of the 1.516 captured dogs. So, in the last two years, the rate of natural mortality among dogs of the public shelter in Ploiesti has had a high rate, stretching from 42 to 56 percent of the total captured quadrupeds. However, the local town-hall ensures the fact that the dogs are well fed because the institution has “sponsorship contracts with various hypermarkets and slaughterhouses which supply by-products that are not intended for human consumption” and that the shelter fully complies with the legal requirements.

Last week, VIER PFOTEN (FOUR PAWS) released an evaluation report for 43 out of the approximate total 80 public dog-shelters in Romania. Investigators of the international organization for the protection of animals discovered remains of dogs left to rot among the living (7 percent of shelters), overpopulated shelters (47 percent), food contaminated with garbage, feces or urine (74 percent) and dogs that were sick or had open wounds. While in some shelters the investigators found irregularities (three in Cluj and Craiova), in other shelters the goal seemed to be the extermination of animals (29 violations in the shelter from Pascani). The main problem is that the dishes and the drinking water are not clean. Food managing is wrongly done in 32 out of the 43 shelters –that’s 74 percent. Out of the visited shelters, 14 (30 percent) admitted to killing the dogs after 14 days of being unclaimed or adopted, according to the law given in 2013. Representatives of 26 shelters (55 percent) said they don’t resort to euthanasia.