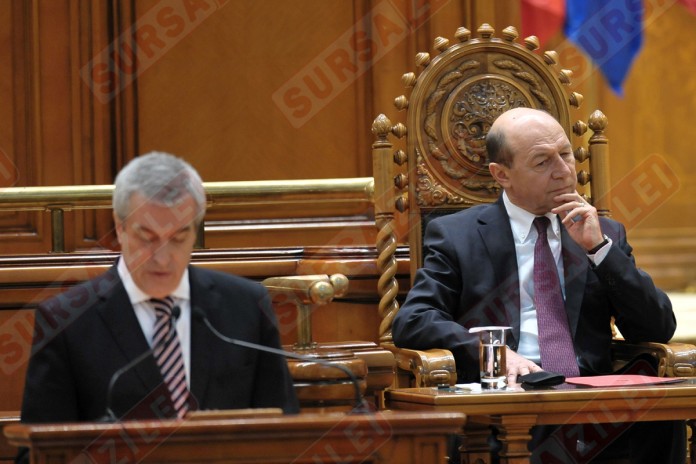 Romanian President Traian Basescu will be suspended by the Parliament

The Senate President, Calin Popescu-Tariceanu, president of the Liberal Reform Party (PLR), declared at the Parliament House that the party that he is leading will gather signatures, come Monday, to begin the proceedings to suspend Traian Basescu from the presidency of Romania.

During the press conference that he held on Monday at the Senate, Calin Popescu-Tariceanu also announced the calendar which he proposes for the impeachment: on the 23rd of September – voting in the Parliament on the request for impeachment and on November the 2nd – Referendum.

I have taken steps in presenting the group leaders of both the Senate and the Chamber the initiative to suspend the President of Romania. Today at 12.00, I have a meeting with the leaders of the parliamentary groups of the Senate. The main issue is related to the negotiation of the proportions in the Permanent Bureau and in the committee structures, but on this occasion I will also have the opportunity to present the request for impeachment

The Senate President said that he will not seek, after the possible dismissal of Traian Basescu, to be Acting President, but instead that would be exercised by the president of the Chamber of Deputies, Valeriu Zgonea.

He also stated that on Monday he will initiate discussions with the leaders of the parliamentary groups of the Chamber of Deputies.

On Friday evening during a press conference, Tariceanu exhibited the reasons underlying the initiative for Basescu’s impeachment.

According to Tariceanu, this initiative comes as a result of „recent and notorious political events”, which would have constituted in „official unequivocal warnings against the anti-constitutional behavior of the President of Romania”.

The President of Senate mentioned the declaration adopted by the Parliament on the 25th of June, calling for the resignation of the head of state, and the press release which he gave as President of Senate, on the 21st of August, on the meeting at the Cotroceni Palace between the head of state and a delegation of the PMP (Popular Movement Party), and the subsequent statements made by Traian Basescu on a TV station.

„The official warnings have been ignored these days in a public and defiant manner by the President of Romania. The direct and institutional intervention of Mr. Traian Basescu at the European Commission President, Jean-Claude Juncker, on the matter of the portfolio and the Romanian candidate for the European Commissioner function and to support the position of party presidents Vasile Blaga and Klaus Johannis, is an escalation of the unconstitutional practices and a double violation of the Constitution by the President of Romania” Tariceanu also stated.

Tariceanu added that due to “exclusive debates and consultation with liberal colleagues of the PLR”, the decision was made to initiate the suspension and dismissal of the President.

„Surely, parties and parliamentarians will oppose this initiative” Tariceanu says, who further indicates that he is trying to anticipate their motivation and to come up with a series of counter-arguments. He referred to the possible motivation that an eventual suspension “will allow Traian Basescu to freely participate in the electoral campaign”.

Out of fair-play in the competition that I am participating on behalf of the PLR, to not create an unfair advantage over the other competitors and to not give rise to speculation, I am declaring right now that after the suspension of the Presidential office I will not accept to serve as Acting President of Romania, as the Constitution provides, and this position will be filled by the President of The Chamber of Deputies

Tariceanu also sustains the fact that, following the action that he proposes, “A number of issues will arise, related to the mentality of some politicians and to the hypocritical propaganda promoted during the presidential campaign, deftly camouflaged by the parties and by the candidates who are working for the perpetuation of the Basescu regime; the two sides will be clearly outlined. Those who will join us are those that want to ‘bury’ the Basescu regime, and those that won’t sign with us are those who want the perpetuation of the Basescu regime”.

The Senate President said that in the coming days the initiators will publish the “Suspension Demand”, the text with which they will invite all the parliamentarians to join them on initiating the procedure of impeaching the President.

„If at least a third will sign out of the total number of parliamentarians, the text will further be submitted to the Parliament of The Constitutional Court for its opinion. The PLR parliamentarians will be the first ones to sign this petition” Tariceanu added.