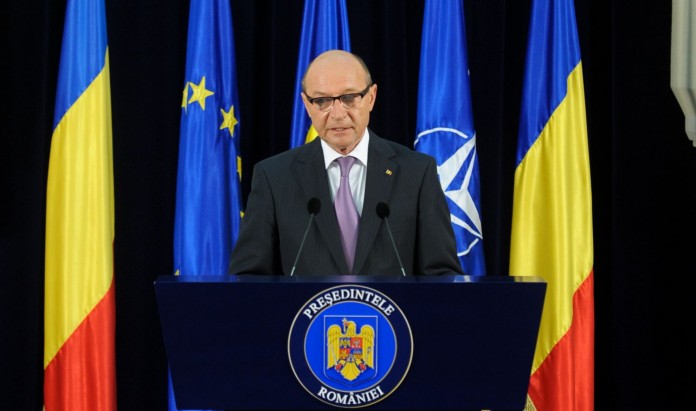 Traian Basescu’s name appears in the transcripts of the discussions between Viorel Hrebenciuc and Dumitru “Mitica” Iliescu, contained in the report through which the DNA prosecutors (National Anticorruption Directorate) are asking approval to arrest the PSD leader.

Dumitru Iliescu is former head of Protection and Guard Service (SPP –  the public service that guards the president and the members of the Government). From the transcripts it appears that Dumitru Iliescu’s “mole” in the DNA had told him about the link between the head of state and 27 million, “business” which is in the DNA’s sight.

The only public information about the possible link between Traian Basescu and the figure of 27 million is the value of a property investment which Aliodor Manolea, “the energetic bodyguard” of Basescu and Mircea Geoana, made in 2010 in Vaslui. The journalists from Gandul were writing on the 20th of January, 2010, about Manolea’s involvement through the Advanced Home Concepts SRL firm – where he owns 33.3% of the shares – in building a residential neighborhood called “Stefan cel Mare”. The district from Vaslui was going to comprise of 6 blocks, built on 10.000 square meters, the investment value being calculated at 27 million EUR.

ILIESCU DUMITRU: He is now at the judicial police, at the DNA. And he came up with this information, he also knew about Ponta and about all who are especially watched, etc.

ILIESCU DUMITRU: He knew about Basescu, about the 27 million, that he had the mandates to take them.

VIOREL HREBENCIUC: Yes, yes. How long does a mandate last?

ILIESCU DUMITRU: The mandate is generally given for six months.

VIOREL HREBENCIUC: Six months? So they are still on the mandate.

ILIESCU DUMITRU: If it’s a mandate on national security it is given for only a few weeks, but they may be extended, godfather.

VIOREL HREBENCUC: Well for me it will certainly extend.

ILIESCU DUMITRU: They can give them for a month as well, it depends on how much time they are needed….six months, even a year, but usually just six months.

The file regarding Viorel Hrebenciuc, Mitica Iliescu and Dan Sova is being prosecuted by Iulian Pancescu, a criminologist recently promoted from the Bucharest Court’s Prosecutor’s Office, who handled the case regarding the bribes received by the president’s brother, Mircea Basescu, from Bercea Mondial.