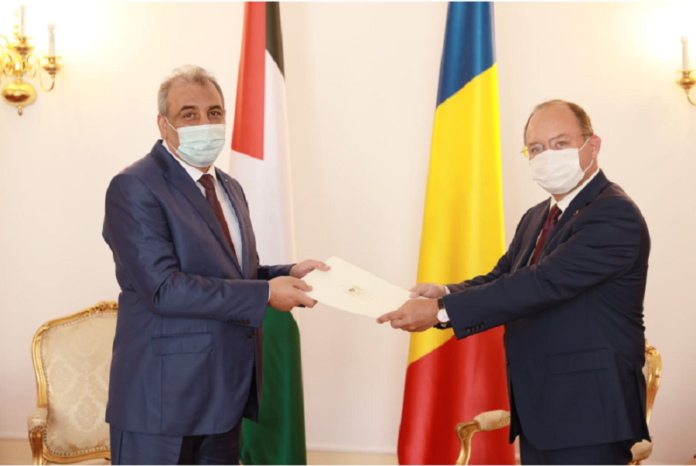 Romanian Foreign Minister Bogdan Aurescu on Thursday welcomed Issam Tawfiq Masalha, the approved ambassador of Palestine in Bucharest, in order to receive copies of the accreditation letters, hailing the excellent developments in the bilateral relationship and reiterating Romania‘s growing interest in strengthening sectoral relations with Palestine, according to Agerpres.

The Romanian Ministry of Foreign Affairs (MAE) stated in a press release that Aurescu underlined Romania’s commitment to continuing supporting the institution-building process in Palestine and to continue to contribute to the increasing number of scholarships given to Palestinian students in Romania.

The head of the Romanian diplomacy highlighted the constant support of Romania for the development of the EU-Palestine relationships, including by concluding an association agreement proper.

The two dignitaries exchanged views on the Middle East peace process, with Aurescu reiterating Romania’s continued support for the implementation of the two-state solution, Israel and Palestine coexisting in peace and security, based on international law, emphasising the need to implement confidence-building measures designed to facilitate the resumption of direct dialogue between the parties.

Aurescu mentioned Romania’s readiness to contribute to the international community’s effort to resume direct negotiations between the parties by creating the necessary conditions.

The two diplomats exchanged views on recent developments in Afghanistan, with Aurescu presenting the ongoing efforts of Romania to evacuate Romanian nationals still on Afghan soil.

The Romanian foreign minister voiced confidence that the new ambassador’s term of office will be marked by an upward dynamic of bilateral political dialogue, as well as an uptake in the frequency of diplomatic contacts, stating his full support for achieving such goals.