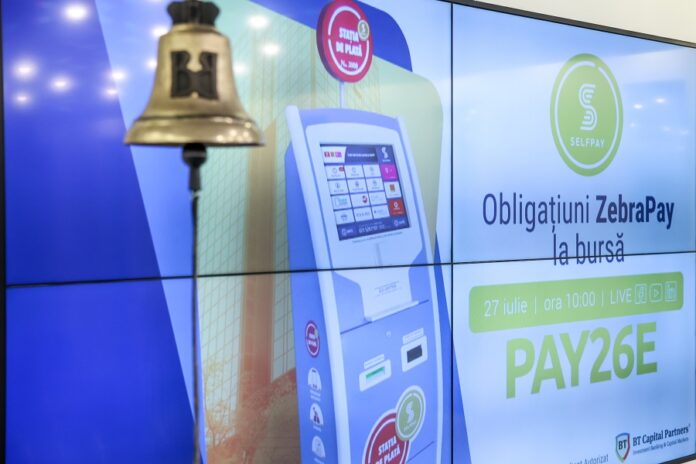 The company’s bonds are traded under the ticker PAY26E. The private placement and bonds’ listing were carried out with the support of BT Capital Partners, as an Intermediary and Authorized Advisor.

The listing of the bonds follows a private placement of bonds through which the company attracted from the capital market investors the financing necessary for the development of the network of Payment Stations at a national and international level and for the diversification of services.

“The value of all corporate bond issues and government bonds listed since the beginning of the year exceeds 1 billion euros, funds that support the development of the economy. We are glad that SelfPay has chosen the capital market to implement its expansion plans at a national and international level,” said Bucharest Stock Exchange President, Radu Hanga.

During the private placement, 99 investors subscribed, and the minimum subscription of an investor was 200 bonds, respectively EUR 20,000.

The company’s net profit raised from RON 1.1mn in 2019 to RON 4.5mn in 2020, due to the growing number of transactions, most of which are payments for invoices and other services.

For 2021 the company forecasts a 15% increase in revenues, up to RON 129.9mn, and for 2022 up to RON 167.3mn. The growth perspectives are based on a business plan that includes the development of the national Pay Station network, a mobile application to diversify customer service and the 2022 development of a Pay Station network in Spain, Italy, France, Ireland, as well as other countries in the region.

According to the company’s perspectives, by the end of 2026 the number of payment terminals will reach a total of about 19,000, both nationally and internationally (in the four target markets for expansion, Italy, Spain, France and Ireland). The funds raised through the private bond placement will support the SelfPay team’s growth plans.