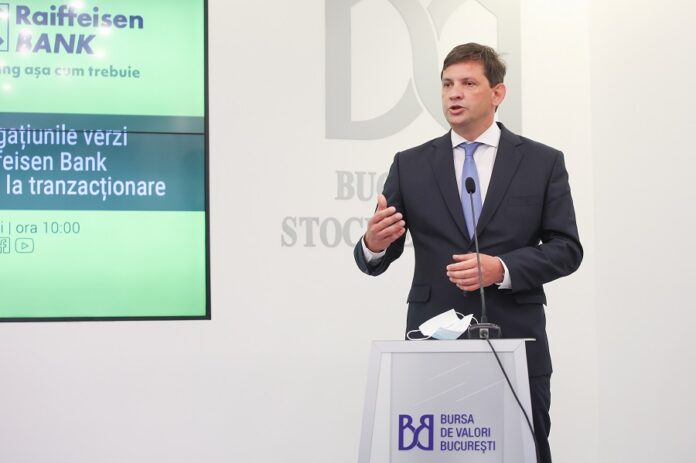 The bonds are worth over RON 400 mln and are traded under the ticker RBRO26. It is the fourth Raiffeisen Bank bond issue traded on the main market.

BVB explained that the funds obtained will be channelled to finance Raiffeisen Bank’s eligible projects to ensure the transition to a sustainable and solid economy.

“Listing the green bonds issued by Raiffeisen Bank, we reaffirm our commitment to contribute both to the development of sustainable and prosperous communities, by mobilizing resources to projects that generate value for the entire Romanian society and the development of the capital market by diversifying the products offered to Romanian investors,” said Raiffeisen Bank President and CEO, Steven van Groningen.

BVB stated that the first issue of green bonds carried out by Raiffeisen Bank on the Romanian market was addressed to institutional investors and attracted over RON 400.5 mln. The bonds have a 5 years maturity, a fixed coupon of 3.086%, approximately 0.5 pp. over the yield of government securities, with the same maturity and issued in the same currency, RON. With a demand of almost RON 650 mln, the bond issue was oversubscribed by almost 1.6 times.

“This bond issue confirms the direction that both we and investors consider important for the society we live in, namely the sustainability of all projects financed through the capital market,” said Bucharest Stock Exchange CEO, Adrian Tanase

BVB said that along with the bonds that started trading, listed also on the Luxembourg Stock Exchange, investors have the opportunity to invest in Raiffeisen Bank bonds listed on May 14th, 2020, under the ticker RBRO29, an issue with a total value of RON 480 mln and a 9 years maturity. The first two bond issues of Raiffeisen Bank, from 2013 and 2014, have reached maturity.