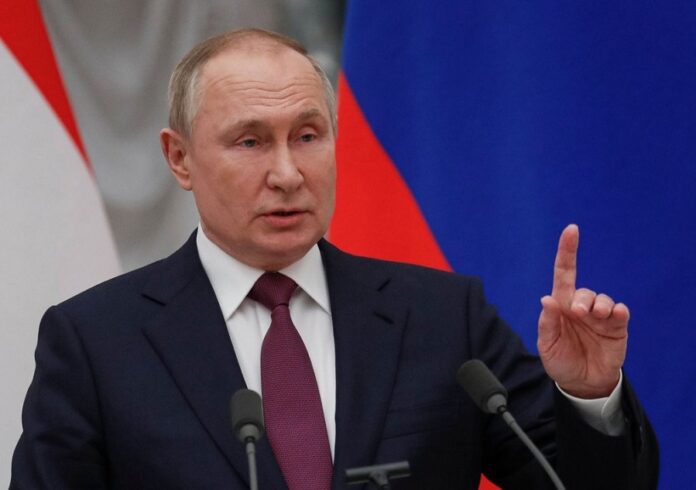 Putin accuses U.S. of trying to lure Russia into war

Russian President Vladimir Putin accused the West on Tuesday of deliberately creating a scenario designed to lure it into war and ignoring Russia‘s security concerns over Ukraine, according to Reuters.

In his first direct public comments on the crisis in nearly six weeks, a defiant Putin showed no sign of backing down from security demands that the West has called non-starters and a possible excuse to launch an invasion, which Moscow denies.

„It’s already clear now … that fundamental Russian concerns were ignored,” Putin said at a news conference with the visiting prime minister of Hungary, one of several NATO leaders trying to intercede with him as the crisis has intensified.

Putin described a potential future scenario in which Ukraine was admitted to NATO and then attempted to recapture the Crimea peninsula, a territory Russia seized in 2014.

Russia has massed more than 100,000 troops on the Ukrainian border and Western countries say they fear Putin may be planning to invade. Russia denies this but has said it could take unspecified military action unless its security demands are met. Western countries say any invasion would bring sanctions on Moscow.

„The Kremlin wants the West to respect a 1999 agreement that no country can strengthen its own security at the expense of others, which it considers at the heart of the crisis,” Foreign Minister Sergei Lavrov said.

He raised the charter signed in Istanbul by members of the Organisation for Security and Cooperation in Europe, which includes the United States and Canada, during a call with U.S. Secretary of State Antony Blinken.

Lavrov said Blinken accepted the need to discuss the matter further whilst a U.S. account of the call focused on the need for Moscow to pull back.

„If President Putin truly does not intend war or regime change, the Secretary told Foreign Minister Lavrov then this is the time to pull back troops and heavy weaponry and engage in a serious discussion,” a senior State Department official told reporters.

The U.S. is willing to discuss giving the Kremlin a way to verify the absence of Tomahawk cruise missiles at NATO bases in Romania and Poland, if Russia shares similar information about missiles on certain Russian bases, Bloomberg reported.

The White House and State Department did not immediately respond to requests for comment but a source familiar with the situation said the United States has only offered to have talks on a variety of Russia’s concerns, such as arms control issues in the appropriate forums.

The remarks made by Putin on Tuesday reflected a world view in which Russia needs to defend itself from an aggressive and hostile United States. Washington is not primarily concerned with Ukraine’s security, but with containing Russia, Putin said.

„In this sense, Ukraine itself is just an instrument to achieve this goal,” added Putin. „This can be done in different ways, by drawing us into some kind of armed conflict and with the help of their allies in Europe, forcing the introduction against us of those harsh sanctions they are talking about now in the U.S.”

Hungarian Prime Minister Viktor Orban, who has often sparred with Western European leaders over democracy in his own country, said he believed after his talks with Putin that there was room for a compromise.

„I got convinced today that the existing differences in positions can be bridged and it is possible to sign an agreement that would guarantee peace, guarantee Russia’s security and is acceptable for NATO member states as well,” Orban said.