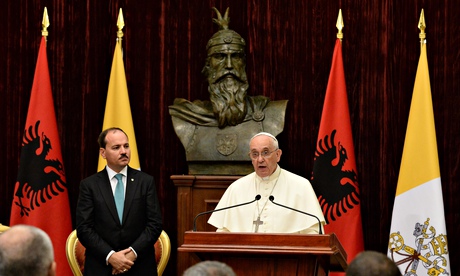 The Sovereign Pontiff: Albania is not „a Muslim country, but a European one”

Albania is not a Muslim country, but a European one, and choosing a first visit to this small country of the European continent is “a signal that I wanted to give to Europe”, declared Pope Francis on Sunday, when returning from Tirana, AFP reported on Monday.

Asked what had determined him to choose a small country, outside of the European Union as the first destination on the Old Continent, Pope Francis said: „I wanted to send a message, a signal” towards Europe.

He strongly welcomed the “youth” and “brotherhood” of the Muslim, Catholic and Orthodox parts of the Albanian society.

Pope Francis often criticizes the “fatigue”, the issues related to welcoming immigrants, the relativism of major economies, particularly those in Europe.

Although Albania is a country with a Muslim majority (56%), it is not “a Muslim country, but a European one”, insisted the Sovereign Pontiff.

Tirana has obtained the status of candidate for joining the European Union in July.

The Islam is often cited as a reason that might prevent the entry of some countries in the EU, such as Turkey and Albania, because it is the symbol of too great cultural differences.