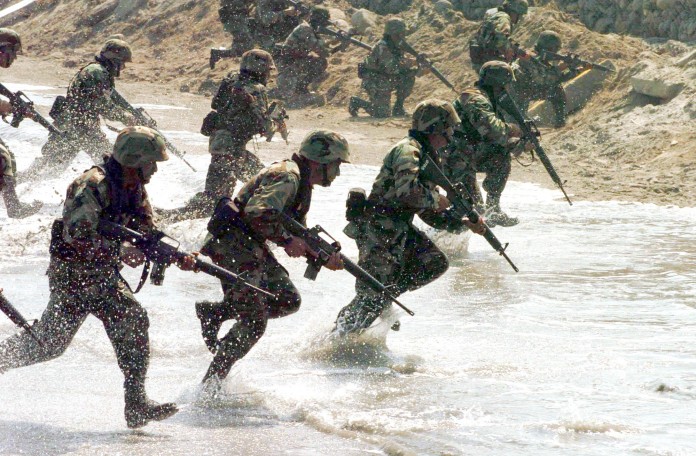 NATO is preparing for war. Rapid response forces, in Romania

NATO approved a rapid response plan at the Wales Summit

At the Wales Summit, NATO approved a rapid response plan which includes the establishment of a unit in Romania and stationing ships in the Black Sea. The number of soldiers, ships, equipment and planes will increase in Romania.

The NATO Summit in Newport, in the UK, continues on Friday with a new round of discussions. The event brings together over 60 leaders and 4.000 delegates amid tight security measures.

Friday, British Prime Minister David Cameron announced that the new NATO response force against Russian threats will have the Command Center in Poland and 4 other units in 4 states in the East. NATO multinational forces will be able to mobilize in 2 to 5 days and the UK is willing to contribute with 3.500 soldiers, Cameron said.

In turn, NATO Secretary General Anders Fogh Rasmussen announced on Friday that NATO approved the maintaining of a continuous air, land and sea presence in the eastern part of the Alliance, where a special commandment will be. Rasmussen announced the creation of a NATO Rapid Response Force, consisting of thousands of soldiers that can intervene in a few days in any area “to supportallies”. Rasmussen mentioned that, at the moment, the security environment is really unpredictable – Russia is attacking Ukraine, there is extreme violence in the Middle East and the instability in Northern Africa is growing.

According to Rasmussen, the decision on Friday at the NATO Summit represents a message that NATO is protecting all its allies at any given time.

According to the NATO Secretary General, it also sends a message to those that attack any country of the Alliance: “If you’re thinking of attacking one member, you will face the retaliation of the whole Alliance”.

He also added that in the context of Russia attacking Ukraine, NATO must be prepared to take measures to protect its allies.