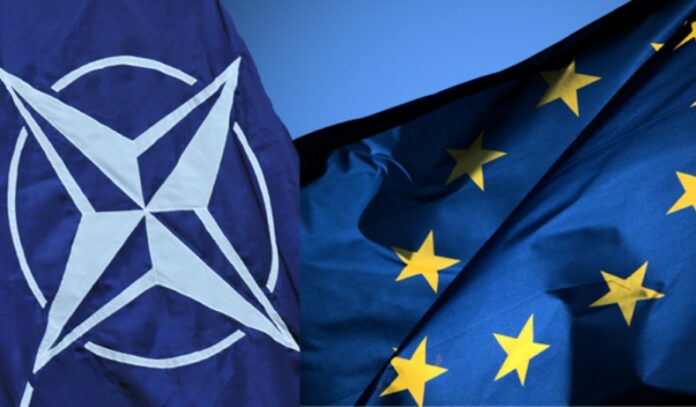 NATO and the European Union have added to Western criticism of Iran over a purported drone attack on a merchant ship in the Arabian Sea that killed two crewmen last week, urging Tehran to respect its international obligations, according to rferl.org.

The July 29 strike on the Mercer Street tanker killed two crewmembers, one Briton and one Romanian, making it the first known lethal attack on commercial shipping amid tensions in the region since the breakdown three years ago of a nuclear deal between world powers and Iran.

NATO spokesman Dylan White said the 30-nation military alliance joins members the United States, Britain, and Romania “in strongly condemning the recent fatal attack on the MV Mercer Street off the coast of Oman, and express our condolences to Romania and the United Kingdom for the losses they have suffered.”

Israel has also blamed Iran for the incident, whose damaged target is operated by a company controlled by a wealthy Israeli.

“Freedom of navigation is vital for all NATO allies, and must be upheld in accordance with international law,” said White.

“Allies remain concerned by Iran’s destabilizing actions in the region, and call on Tehran to respect its international obligations,” added White.

The EU deplored the attack, voicing its condolences for the victims and calling for a thorough independent investigation.

“Such acts contrary to the security and freedom of navigation in the region are unacceptable,” said European Commission spokeswoman Nabila Massrali. “All parties concerned must avoid all actions that could undermine peace and regional stability.”

Tehran has denied any involvement in the attack and warned on August 2 that it would respond swiftly to any threat to its security.

Romanian Foreign Minister Bogdan Aurescu said on Monday that Romania strongly condemns the Iranian drone attack against Mercer Street and that there is no justification whatsoever for deliberately attacking civilians.

U.S. Secretary of State Antony Blinken said on August 2 that there was “no justification” for the attack.”

Blinken called it an indication that Iran “continues to act with tremendous irresponsibility when it comes to, in this instance, threats to navigation, to commerce, to innocent sailors who are simply engaged in commercial transit in international waters.”

Blinken echoed a British statement that there would be “a collective response.”

Britain summoned the Iranian ambassador over the attack, and British Prime Minister Boris Johnson said Iran should “face up to the consequences of…[an] unacceptable and outrageous attack.”