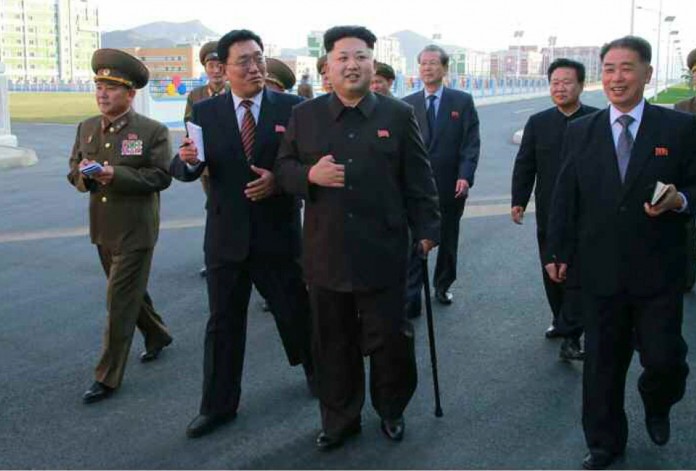 Kim Jong-un reappears in public, with a cane

North Korean leader Kim Jong-un reappeared in public, using a cane, after over a month in absence, which gave rise to many speculations about his health condition or even about a coup d’etat, AFP reports.

This is the first mention of a public appearance of the North Korean leader since September the 3rd, date on which he attended a concert in Pyongyang with his wife. Absence from the last anniversary of the ruling party fueled speculations about his fate.

The KCNA official agency reported that Kim Jong-un made a “supervising” visit to a new residential complex, purposely built in the capital for the scientists who are working on North Korea’s satellite program.

On Tuesday, the photo of a smiling Kim Jong-un was occupying nearly the entire first page of the Rodong Sinmum, the newspaper of the ruling party. Other photos, smaller ones, depicted the leader during his visit while supporting himself in a black cane.

The short story made no mention on the public absence of the North Korean leader, who would be 30 or 31, and no comments on his health.

Assumptions regarding the absence of Kim Jong-un had multiplied, some citing various health issues from which the North Korean leader would suffer, a heavy smoker who gained enormous weight in the last year: fatigue, gout, ankle fractures, diabetes. Other scenarios were even talking about a coup d’etat against this leader who is the subject of a personality cult ably maintained by official propaganda.

Rumors have escalated amid Kim Jong-un’s absence from the ceremonies celebrating the anniversary of the ruling party, which was attended by the leading dignitaries of the regime. However, the South Korean Government said that that their intelligence services estimate that Kim Jong-un continues to firmly control the power.