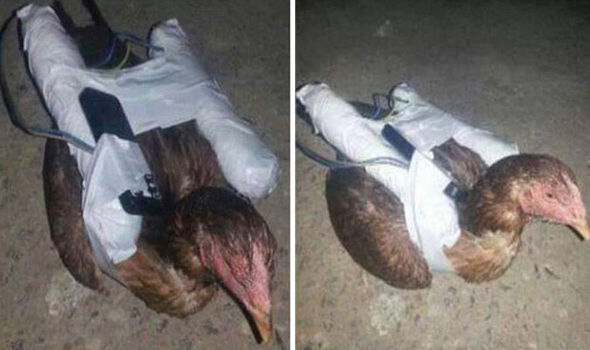 The USA has been constantly targeting delivery lines between Iraq and Syria in the past weeks. What this means is that the so-called Islamic State may have the necessary weapons to cause massive destruction and terror, but they are running low on ammunition.

But, as you can see in the photo, their inventiveness doesn’t disappoint, as they are finding more and more means of using their arsenal. You may laugh, but using animals as means of delivering explosives to the target is neither something new, nor ineffective.

The Soviets were using anti-tank dogs in World War II. They were initially trained to leave the bombs and get out of there, but that plan kept failing, so they decided that dogs were dispensable. They would carry the bombs beneath the tanks and stay there, dying in the explosion.

Iraqi insurgents were experimenting with the same tactic in the 2000s, and the USA had also trained anti-tank dogs in WWII, but never actually used them in battle.

Heading back to the Islamic State, terror expert Kataw Nasser had this to comment: “The regime has countless small arms like semi-automatic weapons and pistols and lots of field weapons like mortars but the ammunition is running low and cannot easily be replaced. The regime is now desperately trying to fashion its own weapons but lacks the machine shops to make such precision items.”