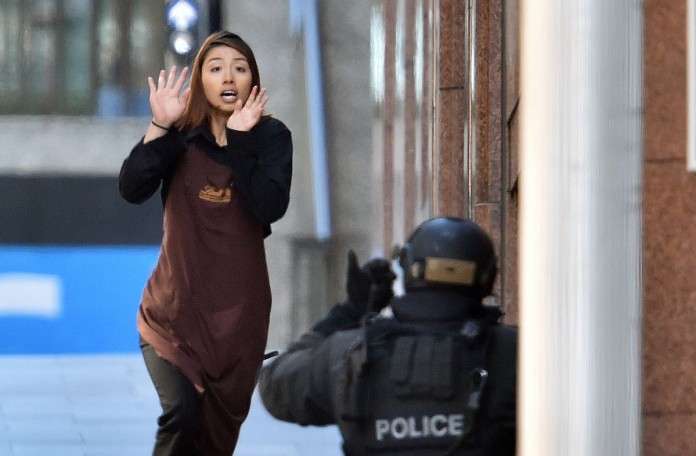 Hostage situation in a coffee shop in Sydney, where an Islamic flag was being held at the window

On Monday, one gunman was holding an unknown number of hostages in a café in Sydney

Dozens of hostages were being held on Monday morning in a café in central Sydney, while local televisions showed that some were forced to hold an Islamic black flag at the window, Reuters reports.

Australian Prime Minister Tony Abbot, who warned about the plans of Islamist militants to attack Australian targets, announced that he urgently convened the National Security Committee for information on the hostage taking at Lindt Café in the commercial capital of the country.

„Police face an armed incident and special officers are trying to make contact with those inside the coffee shop”, declared New South Wales police in a press release.

Australia, who is supporting the United States and their actions against the Islamic State escalation in Syria and Iraq, is on high alert for radical Muslim attacks or local combatants returning home from the Middle Eastern conflict.

The TV images showed several people inside the café standing with their hands against the window.

The images also showed a black flag with white text similar to those used by the militants of the Islamic State in Iraq and Syria, held by what seemed to be a staff member and another woman.

The nearby Sydney Opera House was evacuated temporarily after the discovery of a suspicious package, a staff member told Reuters.

On Monday, one gunman was holding an unknown number of hostages in a coffee shop in Sydney, located in the city center, police said, adding that it is too soon to talk about a terrorist operation, according to AFP.

Martin Place, a square located in the business district of Sydney, was evacuated and dozens of armed police officers were surrounding Lindt Chocolat Café.