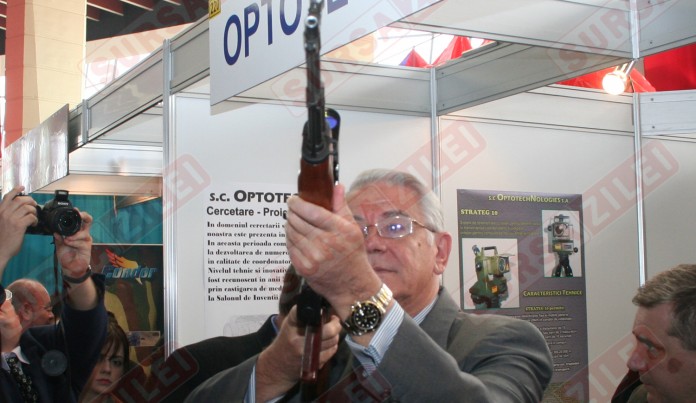 At the end of last week, Melescanu hinted that he might run for president

On Monday, the spokesman for the Central Electoral Bureau (BEC), Marian Muhulet, declared that the Social Justice Party announced that Tuesday morning they will file Teodor Melescanu’s candidacy for the presidential elections.

Muhulet stated that the submitting of the registration folder for the candidacy is to be made Tuesday morning at 10.00.

The BEC spokesman mentioned that he tried to contact Teodor Melescanu for confirmation, but was unable until then (Monday, 17.30).

Teodor Melescanu resigned as head of the Foreign Intelligence Service (SIE), and the information can be found in a letter sent on Monday by President Traian Basescu to the heads of the two Parliament Chambers.

Specifically, Traian Basescu sent a letter to the chairmen of the Senate and the Chamber of Deputies in which he tells them to take note of Teodor Melescanu’s resignation from the post of Director of SIE and to declare the post as vacant.

The Presidential Administration declared, during a press release, that the head of state sent a letter on Monday to the chairman of the Senate, Calin Popescu-Tariceanu, and to the head of the Chamber of Deputies, Valeriu Zgonea.

Dear Mr. President, pursuant to Art. 65, para. (2), let. h) of the Romanian Constitution, republished, I suggest that you take note of the resignation of the head of the Foreign Intelligence Service, Mr. Teodor-Viorel Melescanu and declare the office vacant, following the Parliament to adopt a decision under Art. 76, para. (2) of the Constitution

According to Law no. 1/1998 on the organizing and functioning of the Foreign Intelligence Service, the SIE management is ensured by a Director with the rank of Minister, appointed by the Supreme Council of National Defense, at the proposal of the President of Romania.

Article no. 76, paragraph 2 of the Constitution provides that “the ordinary laws and decisions shall be passed by a majority vote of the members present in each Chamber”.

Last Friday, Melescanu hinted that he might run in the presidential elections. “If you have a little patience, on Monday morning we will have the answers to everything. If the conditions are met, on Monday morning I will give you an answer” said Teodor Melescanu at the Parliament House, being asked by journalists whether he will take part in the presidential elections in November.

Asked if he has collected the signatures for the candidacy, he replied „That’s exactly the problem”.

The deadline for the applications for the presidential elections in November expires Tuesday, on the 23rd of September.