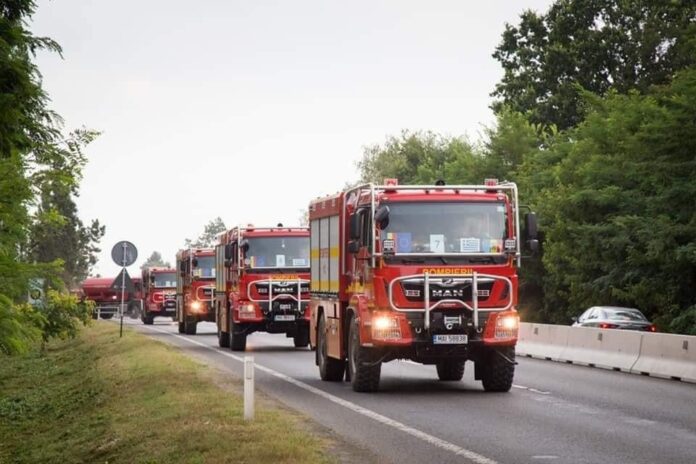 More than 100 Romanian firefighters with 23 special vehicles, have been helping Greece, since Sunday, to battle the wildfires of unprecedented intensity and spread that have been threatening the country lately. “Romanian friends, thank you from the bottom of my heart!” was the message posted by the Ambassador of Greece to Bucharest, Sofia Grammata, for the firefighters.

Firefighters from Romania arrived in Greece, last week, to help extinguish the wildfires, with an impressive convoy of modern firefighting equipment, next to firefighters from Moldova, France, Israel, UK, USA and other countries.

This is the first firefighting operation carried out by Romanians in the territory of another state.

The Consulate of Romania in Thessaloniki posted on social media “We will not leave Greece alone in front of the flames! We stand by our Greek friends!”

The first mission of the Romanian fire brigades started on Sunday, in the Spathari area.

Greece, like many parts of Europe, has been grappling with extreme weather this summer. Prime Minister Kyriakos Mitsotakis said the fires showed “the reality of climate change”.

Hundreds of firefighters are trying to control the fires with about 20 water-bombing aircraft. Extra firefighters and planes were being sent in from countries including the UK, France, Romania, Moldova, Isreal and the US.