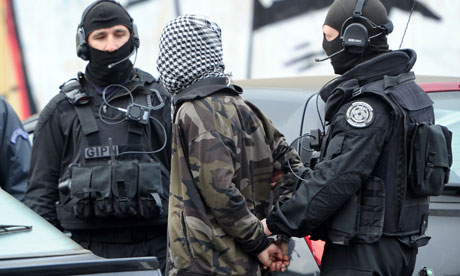 Two of them have recently returned from Syria

Four men were arrested on Tuesday by French Special Forces in the town of Lunel, southern France, in an operation aimed at neutralizing jihadist networks, announced a source of the local police, quoted by Reuters.

Two of them have recently returned from Syria, where they fought alongside Islamist rebels.

The operation was carried out by members of the RAID (Research, Assistance, Intervention and Deterrence) police unit and the National Gendarmerie Intervention Group (GIGN) of France.

The town of Lunel, situated in the Herault region, approximately 25km from Montpellier and having 26.000 inhabitants, attracted the authorities’ attention after French media reported that in recent months, ten locals tried to travel to Syria in order to fight alongside the Islamic State (IS) jihadist group.

The arrest of the four men occurs almost three weeks after Europe was hit by a shock wave following an attack at the headquarters of the “Charlie Hebdo” satirical newspaper, attack which resulted with 12 dead and 11 wounded.