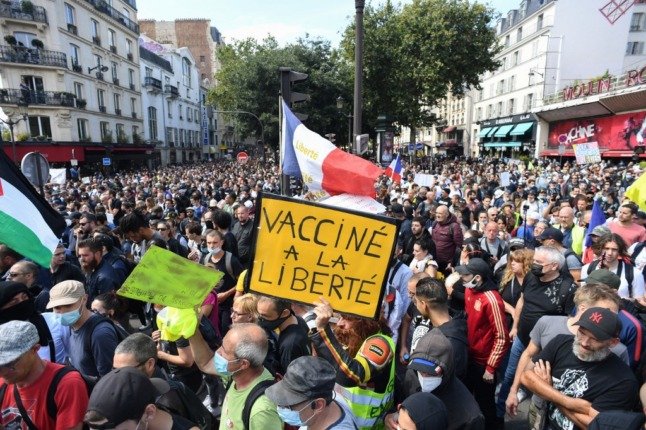 An extension to France’s “health pass” covering activities like going to restaurants and cafes, taking long-distance train journeys and visiting hospitals, has come into effect, on Monday, after the fourth weekend of protests.

Beginning Monday, the health passes will be required to enter bars, restaurants, and malls  and to access long-distance travel by plane, train or bus.

Official figures suggested more than 237,000 people demonstrated across France at the weekend against the introduction of the pass, arguing it infringed their civil liberties.

This was an increase in the number of protesters from the previous week when 200,000 people took to the streets.

Opponents believe the pass sanitaire violates the most fundamental of French principles: the liberté and egalité of the national motto, according to The Guardian.

The pass, championed by President Emmanuel Macron, requires proof of vaccination, a negative coronavirus test result in the past 48 hours, or showing that one has recovered from the virus for at least 15 days, but not more than six months.

The government hopes that this pass sanitaire will boost vaccination rates and it has been required since 21 July for anyone going to the cinema, theatre or a museum and its extension was approved by France’s Constitutional Council on Thursday.

Asked about the protests, the health minister, Olivier Véran said he regretted the amount of attention paid to those who were “anti-vax, anti-science and anti-state”, as shown in a interview by The Guardien.