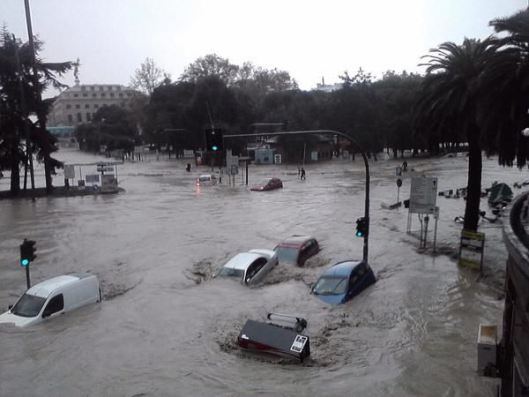 Floods in Italy. Two Romanians were caught stealing in an affected area

A helicopter of the Italian Firefighters intervened in an area isolated because of the floods, saving four Swiss citizens and a Romanian one

A Romanian citizen and four Swiss ones were saved from an area affected by the floods using a helicopter, in the Italian region of Tuscany, Italian authorities announced, according to Mediafax.

The five victims were rescued on Tuesday evening in the town of Marciano, located in the Maremma Natural Park, in the Tuscany region (central Italy).

According to the Ticinonline.it website, a helicopter of the Italian Firefighters intervened in an area which was isolated because of the floods, saving four Swiss citizens and a Romanian one who lives in Italy.

The five were safely transported to the military base in Grosseto (Tuscany), where they received special care.

Two other Romanians were caught stealing in an Italian region affected by the floods.

Two Romanian immigrants were arrested in the Italian town of Genova, under the accusations of committing thefts in areas abandoned by the locals due to the floods, according to the IlSecoloXIX.it on-line newspaper.

The two Romanians, aged 24 and 34, were caught red-handed by the carabineers while trying to steal goods from a vehicle brought by the drift. The immigrants were arrested in the Kennedy Square in Genova, where numerous vehicles drifted after a dam failed in the Bisagno alla Foce area.

Since the flooding took place last Friday, Italian authorities have arrested 22 individuals who were suspected of committing burglaries in the affected areas.

Three people have died and thousands have been evacuated following the floods and landslides caused by the heavy rains that have been occurring in northern Italy for almost a week. The situation is very serious in the Liguria, Tuscany and Friuli-Venezia Giulia areas.