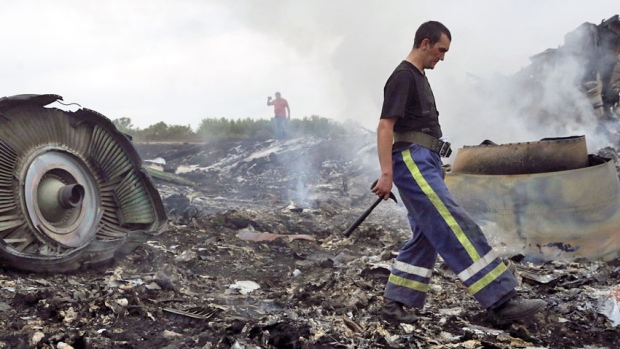 Establishing the true causes of the disaster in eastern Ukraine does not fall into the attributions of the GRU, but in those of the FSB

Western special services know who and why they shot down the Malaysia Airlines’ Boeing 777, but “are manipulating this information” for their own interests, declared on Wednesday Nikolai Pushkarev, retired General of the Main Intelligence Directorate of the Russian Armed Forces (GRU) and former employee of the Russian Ministry of Foreign Affairs, in an interview with RIA Novositi.

„Western intelligence services and the Americans know very well all the details about the authors of the catastrophe and their reasons, but are manipulating this information for their own interests” declared the retired Russian general, who argues that „this challenge was staged in order to accuse Russia and force it to send troops in Ukraine”.

„But the Russian government did not give in to this challenge” says General Pushkarev, adding that the US would be interested in organizing a “direct military conflict between Russia and Ukraine”.

At the same time, he also states that determining the true causes of the catastrophe in eastern Ukraine does not fall into the attributions of the GRU, but in those of the FSB (Federal Security Service, former KGB) and of the SVR (Foreign Intelligence Service).

A Boeing 777 airplane belonging to the Malaysia Airlines Company, which was flying on the Amsterdam – Kuala Lumpur route, crashed on July 17 near Donetsk in an area controlled by the pro-Russian separatist rebels, being shot down with a ground to air missile. All 283 passengers and 15 crew members were killed. Ukraine assumed that the attack was made by the separatist insurgents backed by Moscow, while Russia suggested that the plane was shot down by the Ukrainian army. In a recent report, the German Foreign Intelligence Service (BND) claimed that the Malaysian airplane was shot down by the rebels using a BUK missile system, stolen from a Ukrainian army base.