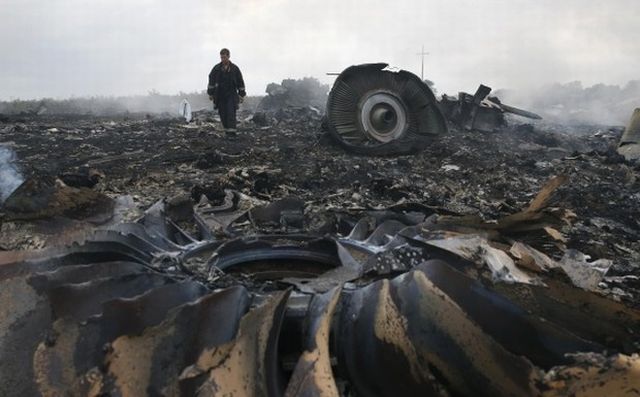 Flight MH17 was shot-down by separatists in Ukraine – AUDIO

Telephone call incriminates the rebels in the plane-crash incident

Flight MH17 was probably shot down by a SA-11 (BUK) anti-aircraft missile, launched from the separatist-controlled territory, in East Ukraine.

A phone call between two rebel leaders recorded by the Ukrainian Security Services, which indicates that their subordinates shot down a civilian aircraft, was certified by American experts, announced the U.S. Embassy from Kiev on Sunday, according to AFP.

„The audio data provided to the press by the Ukrainian Security Services has been examined by experts of the informatics community that confirmed the fact that it is indeed a conversation between known separatist leaders”, stated the American Diplomatic Mission.

According to this press release, the main hypothesis “based on several elements” is that “flight MH17 was probably shot down by a SA-11 (BUK) anti-aircraft missile, launched from the separatist-controlled territory, in East Ukraine.”

On Thursday night, the Ukrainian Security Service (SBU) made public the interception of what seemed to be a conversation between two rebel leaders after examining the crash-site.

This recording was preceded by a conversation between rebel leader Igor Bezler, a Russian citizen, which is talking with Vasili Geranin, colonel of Russian Secret Services and his inside man, according to Kiev.

While presenting these items, the head of SBU, Valentin Nalivaicenko, declared that it’s a conversation between GRU (Russian Secret Services) officers, intercepted and transcribed according to law.