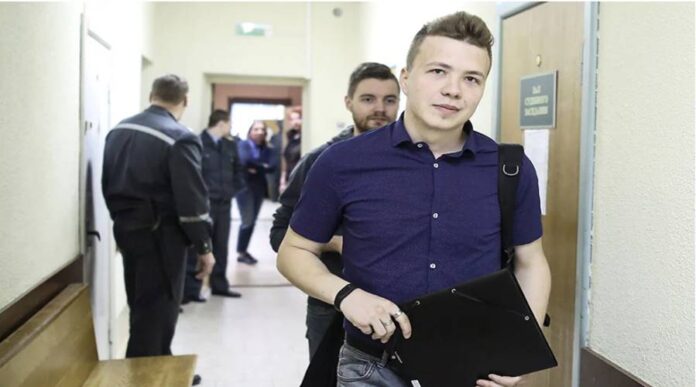 European airlines began skirting Belarus on Tuesday at the urging of the European Union, which also imposed new sanctions to punish the ex-Soviet nation’s forced diversion of a passenger jet to arrest an opposition journalist, according to AP News.

EU leaders agreed Monday at a summit in Brussels, to ban Belarusian airlines from using the airspace and airports of the 27-nation bloc, imposed sanctions on officials linked to Sunday’s flight diversion

The Council urged the International Civil Aviation Organization to start an investigation into the episode some described as state terrorism or piracy.

On Sunday, Belarusian flight controllers told the crew of a Ryanair jetliner flying from Greece to Lithuania that there was a bomb threat against the plane as it was crossing through Belarus airspace and ordered it to land.

A Belarusian MiG-29 fighter jet was scrambled to escort the plane in a brazen show of force by President Alexander Lukashenko.

Belarus authorities arrested 26-year-old journalist and activist Roman Protasevich and his Russian girlfriend, Sofia Sapega. Protasevich was later seen in a brief video clip shown on Belarusian state television, speaking quickly and saying that he was giving a testimony about organizing mass disturbances.

Protasevich, who left Belarus in 2019 and ran a popular messaging app that played a key role in helping organize huge protests against Lukashenko, has been charged in absentia with staging mass riots and fanning social hatred. Those charges carry a prison sentence of up to 15 years.

The Telegram messaging app’s Nexta channel that he co-founded has been labelled as “extremist” by the Belarusian authorities, and some fear Protasevich could face more serious charges, including some that carry the death penalty.

U.S. President Joe Biden said late Monday that he asked his team to develop appropriate options to hold accountable those responsible, in close coordination with the European Union, other allies and partners, and international organizations.