Romanian officials are concerned that scenes of overflowing Italian hospitals during the initial weeks of the pandemic are becoming the reality in Romania, according to Bloomberg.

Amid persistent hesitancy at getting jabs, the nation’s 19 million people are the second-least-vaccinated in the European Union and have suffered the bloc’s highest deaths during the past week. About 15,000 new cases a day are being recorded.

The Italy situation from last year appears to be nearing: Snaking lines of ambulances are already waiting outside hospitals to drop off patients, who are then treated in hallways or have to share oxygen masks handed out by exhausted doctors.

“I’m afraid we’re already in the same scenario because the hospitals are overwhelmed by Covid patients and have to dismiss other emergencies,” said Valeriu Gheorghita, who heads Romania’s vaccination task force. “No one but ourselves can save us from this extremely complicated situation. We need to stop being divided and trust science and the doctors.” 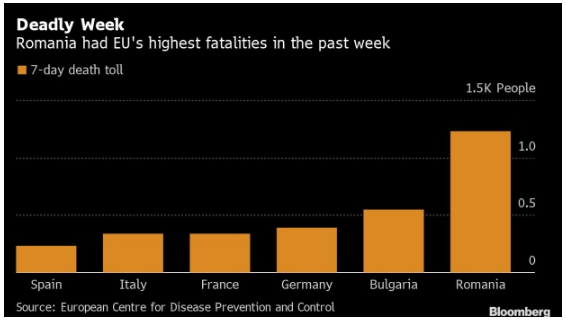