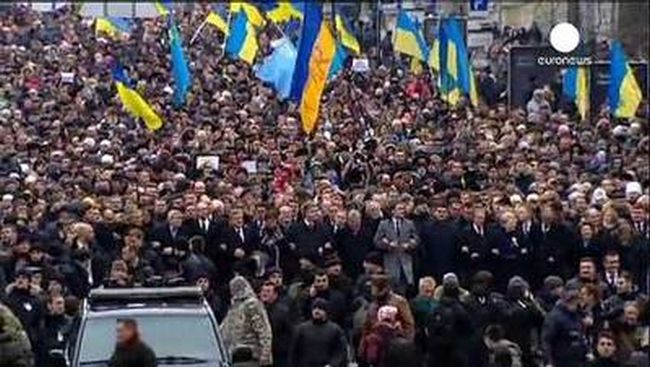 Many foreign leaders, including the President of the European Council, Donald Tusk, gathered on Sunday in the Independence Square in Kiev

Many foreign leaders, including the President of the European Council, Donald Tusk, Moldovan President Nicolae Timofti and thousands of other ordinary people gathered on Sunday in the Independence Square in Kiev, to mark one year since the removal of the former pro-Russian regime led by Viktor Ianukovich. At least three people died and ten others were injured in an attack in the city of Kharkov (eastern Ukraine), Sputnik reports.

The Dignity March began at 13.30, according to the Sputnik Agency’s website.

The European Council President, Donald Tusk, and the leaders of Poland, Georgia, Lithuania, Latvia, Germany and Slovakia announced their participation in the march. The President of Moldova, Nicolae Timofti, was also in Kiev.

At least three dead in an attack in Kharkov.

The bomb attack occurred while approximately 500 people were attending the rally in Kharkov. At least three people have died and ten others were injured in the attack which the authorities blame the pro-Russian separatists for. According to some sources, one of the victims was a police officer.

The political crisis in Ukraine grew in November, 2013, and the Independence Square protests – resulting in over 100 deaths – culminated on the 22nd of February, 2014, with the overthrow of the pro-Russian President, Viktor Ianukovich, refugee in Russia.

Following the establishing of a pro-Western administration in Kiev, Russia annexed the Ukrainian region of Crimea, and a separatist conflict started in eastern Ukraine, leaving more than 5.700 dead.