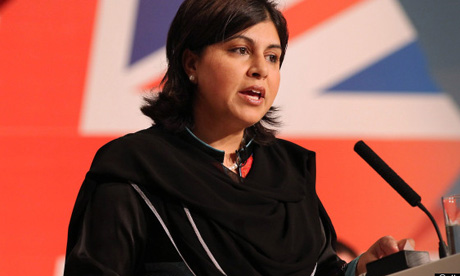 British Secretary of State, Sayeeda Warsi, resigns due to the conflict in Gaza

Sayeeda Warsi: „I can no longer support the Government’s policy on Gaza”

According to AFP, Sayeeda Warsi, the first Muslim woman in the position of Secretary of State in the United Kingdom, announced her resignation Tuesday on Twitter, stating that she can “no longer support the Government’s policy on Gaza”.

With deep regret I have this morning written to the Prime Minister & tendered my resignation. I can no longer support Govt policy on Gaza

Since the beginning of the Israeli intervention in the Gaza Strip, London defended Israel’s right to self-defense, calling for a “proportionate” response.

Sayeeda Warsi, of Pakistani origin, was appointed Secretary of State for Foreign Affairs and Secretary of State for Faith and Communities in September 2012. She was responsible with the problems on Afghanistan, Pakistan, Bangladesh, Central Asia, human rights, the U.N., international organizations and the International Criminal Court, states the Government’s website.

Warsi also dealt with matters concerning the Foreign Office of the House of Lords.