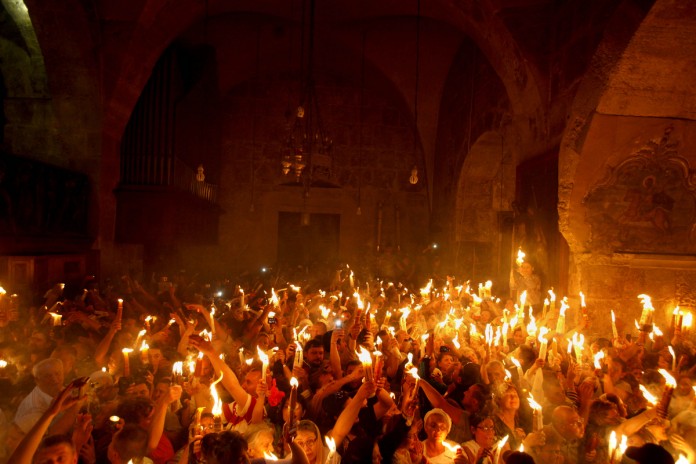 The „Holy Light” is something which the Orthodox Christians describe as a miracle that happens yearly at Jerusalem, inside the Church of the Holy Sepulchre, on the „Great Sunday”. A column made of holy fire is said to emerge from Christ’s tomb, which then lights some of the candles from all around the church. People claim the “Holy Fire” does not burn if touched.

Several candles are lit from the “Holy Fire”, which are then transported in special flights to some of the Orthodox countries, including Greece.

The Atheist Union of Greece is condemning the Greek Government for imposing even a 1 EUR tax for the transport of the supposed “Holy Light”. The union also wrote a letter to the Government, asking for the cost of the transportation to be made public.

Their letter also criticized such an action in reference to the current economic situation of Greece: “In a time when taxpayers Greeks are experiencing cuts in wages and pensions, a severe taxation, unemployment and compression of real income, we consider unthinkable that the Greek State and therefore the Greek taxpayers give even one euro for the transfer of the supposed “Holy Light”.”

A spokesperson of the Patriarch of Jerusalem, said in response that only people “of the darkness” are afraid of the “Light”, and that he assures them that the “Holy Light” will reach Greece this year as well, despite their opposition.

The Atheist Union of Greece, which is militating for the separation of church and state, declared that religious organizations should fund themselves and continued to describe the Government”s actions as discriminatory towards citizens of different religious opinions, or of no religion at all.