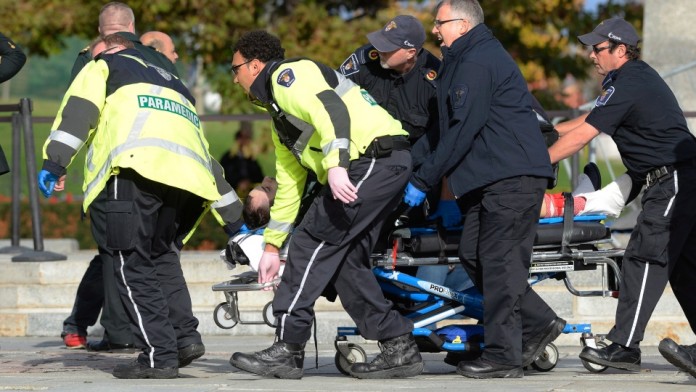 Armed incidents in Ottawa: Antiaircraft alert at Washington. The author of the attack has been identified – VIDEO

A soldier and an attacker were killed. FBI: the IS terrorist group is planning attacks on the United States and Canada

Shots were fired on Wednesday in downtown Ottawa, in front of the Parliament and at a war memorial, where a soldier has been killed, according to sources quoted by the CBC station. Canadian Prime Minister Stephen Harper was at the Parliament during the armed incident of Wednesday, but safely left the area.

According to the FBI, members of the Islamic State terrorist group are planning to attack the United States and Canada.

The author of the attack on Wednesday at the Parliament in Ottawa has been identified as Michael Zehaf-Bibeau, a 32 year old Canadian, considered a “high-risk traveler” by the intelligence services, whose passport has been recently withdrawn.

The man who was shot and killed by the police after opening fire at the office of the Canadian Parliament was wearing an “Islamic veil”, which suggests that it might be an Islamist terrorist plot, perhaps belonging to the Islamic State of Iraq and Levant group, declared officials of the Canadian police.

In this context, the US-Canadian air defense (NORAD) has been put on alert in order “to be able to rapidly respond” to any incident which may be linked to the shooting incident from Wednesday in Ottawa, announced officials of the US military, quoted by AFP.

„NORAD has taken the appropriate measures in order to rapidly respond in the case of an incident that would involve the Canadian air network”, said a Pentagon official, under anonymity.