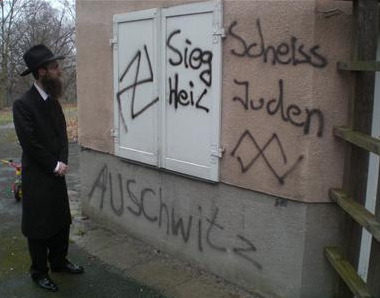 A store was broken into. Fortunately, nobody was hurt

On Thursday, a Jewish store was broken into in the city of Copenhagen. The perpetrators broke the store’s window and wrote anti-Semitic messages on its walls.

Copenhagen’s only kosher deli now has “Jewish pigs” written inside.

This is the latest of a series of attacks against Jews. The rise of anti-Semitic attacks all over Europe is causing concern. An attack in Paris at another kosher deli led to the deaths of four people in February. Fortunately, nobody was hurt this time.

All vandalism is serious, but it is obvious that when it comes to this particular location, there will be an extra focus on it

Among the rise in anti-Semitic attacks, Iran also is hosting the Second International Holocaust Cartoon Contest this May, as a demonstration of ‘free speech’.

Read more about the subject here