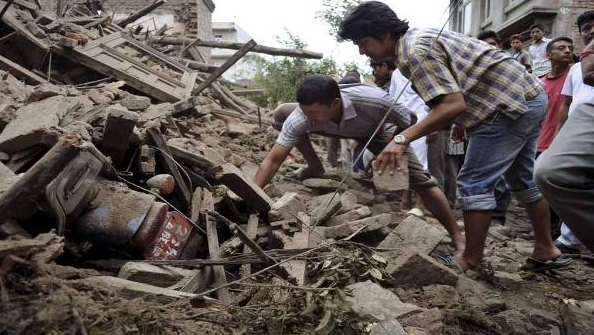 UPDATE 14:10 – There are 14 confirmed deaths: 5 in India, 8 in Nepal and one in Tibet. Facebook video of post-quake in Kathmandu.

A 7.3 magnitude earthquake was felt in India, China and Nepal. It struck at around 12.41p.m. local time in Northern India.

The depth of the earthquake was of 18.5km. It is ranked VII, meaning it comes with ‘very strong shaking’ and gives it a moderate chance of damage.

Data shows a 35% chance of there being 10-100 deaths caused by it. Approximately 10 deaths have been confirmed as of yet.

Hospitals and schools have been evacuated following the event. Engineers will have to check the buildings’ infrastructure before allowing people to go back inside.

Many buildings have collapsed in the town of Chautara (Nepal) and in the Gyirong County (Tibet).

More information is soon to come.