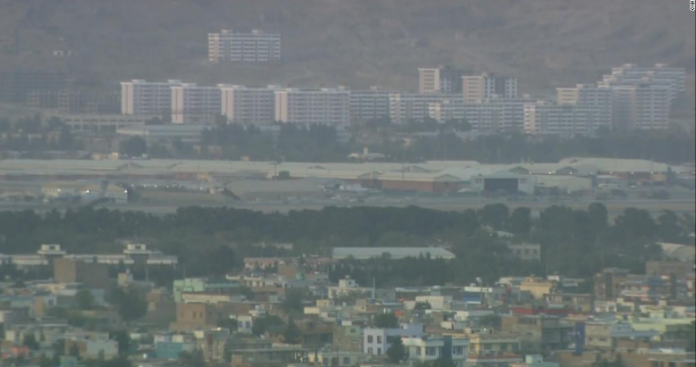 Update 6:00 PM – A suspected suicide bomb exploded outside Kabul airport on Thursday, killing at least 13 people including children, a Taliban official said, according to Reuters.

The Pentagon on Thursday confirmed an explosion at Hamid Karzai International Airport in Kabul, where Western forces are rushing to evacuate as many people as possible out of the country, according to CNBC.

It was unclear whether there were any casualties, according to the Pentagon’s top spokesman, John Kirby.

A White House official told NBC News that President Joe Biden was briefed on the blast.

The latest revelation comes hours after the U.S. Embassy in Afghanistan issued a security alert urging Americans to avoid travelling to Kabul airport.

“U.S. citizens who are at the Abbey Gate, East Gate, or North Gate now should leave immediately,” the alert said.

In the last 24 hours, Western forces evacuated 13,400 people out of Kabul on 91 military cargo aircraft flights. Since the mass evacuations began on August 14, approximately 95,700 people have been airlifted out of Afghanistan.

About 101,300 people have been evacuated since the end of July, including about 4,500 U.S. citizens and their families.

Secretary of State Antony Blinken said Wednesday that there may be as many as 1,500 Americans in Afghanistan left to evacuate, a calculation he explained was “difficult to pin down with absolute precision at any given moment.”

The nation’s top diplomat added that the U.S. currently is “aggressively reaching out” to about 1,000 contacts “multiple times a day, through multiple channels of communication” to determine if they still want to leave and to give them instructions on how to do so.

Blinken added that the actual number might also be lower.

Biden on Tuesday reiterated to leaders of the G-7, NATO, United Nations and European Union that the United States will withdraw its military from Afghanistan by the end of the month.

The president warned that staying longer in Afghanistan carries serious risks for foreign troops and civilians. Biden said that ISIS-K, an Afghanistan-based affiliate of the terror group, presents a growing threat to the airport.

“Every day we’re on the ground is another day we know that ISIS-K is seeking to target the airport and attack both U.S. and allied forces and innocent civilians,” he said.

The Taliban said earlier Tuesday that the group will no longer allow Afghan nationals to leave the country on evacuation flights nor will they accept an extension of the withdrawal deadline beyond the end of the month.

“We are not in favour of allowing Afghans to leave,” Taliban spokesman Zabihullah Mujahid told reporters during a press conference on Tuesday.