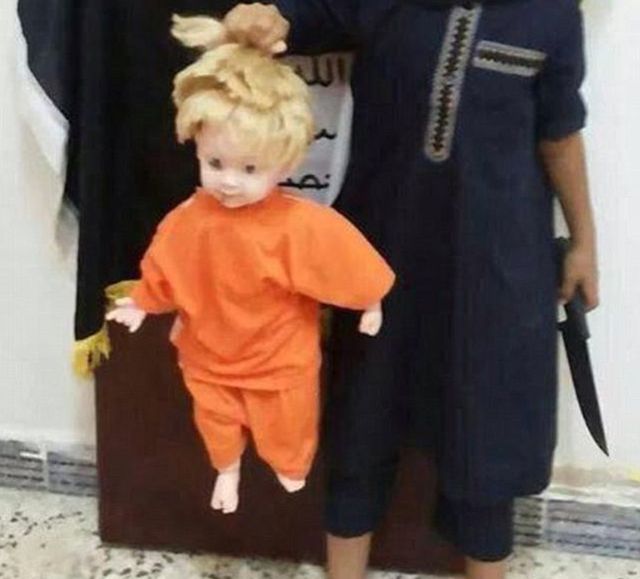 A child beheads a doll in a „reenactment” of the execution of American journalist James Foley. PHOTOS

Wearing dark clothes and a face mask, a child using a knife beheads a doll with blonde hair, dressed in an orange jumpsuit

According to the ibtimes.co.uk, the Islamic State (IS) terrorist group “reenacted” the execution of American journalist James Foley, publishing a recording of a child who beheads a doll that is wearing an orange jumpsuit.

The reenactment images were posted by a supporter of the Islamic State terrorist group along with the following message: „Teach your children to cut necks, tomorrow there will be a lot of rotten heads”.

The unidentified child, aged somewhere between 8 and 10, appears standing in front of a black flag – the symbol of the terrorist group. Wearing dark clothes, a face mask and using a knife, the child beheads a doll with blonde hair that is wearing the same clothes as prisoners sentenced to death in American penitentiaries.

In another image, the doll appears decapitated with red paint along the neck.

On the 20th of August, the Islamic State (IS) announced that they have beheaded American journalist James Foley as retaliation for the air strikes in Iraq.