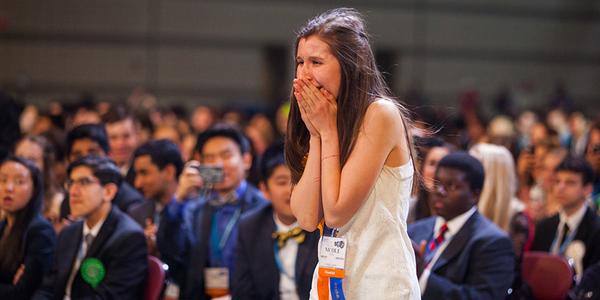 Nicole Ticea has received the 2015 Intel Foundation Young Scientist Award for her invention. She has started her own company and got a $100.000 grant in order to continue the development of this newly found technology.

She declared that she got the idea when she discovered a connection between microfluidics and HIV research. Nicole also won the Sanofi BioGENEius Challenge with her project and stated that her ultimate goal “has always been to see my test being applied in an everyday setting where it can make a difference.”

The home-test is expected to be mass produced and FDA-approved within 5 years.

As advice for other teenagers, she stated:

„Persistence is key. I cannot count the number of rejections I received before finally finding a mentor willing to aid me with my project. I was urged several times — by my parents and teachers, no less — to find a different project or give up altogether. Even after finding a mentor and lab, I was plagued by false positives, failed experiments and long hours at the lab, which interfered with my schoolwork and athletic activities.

In truth, I believe that anyone with enough fortitude and persistence can make a large impact upon whichever field they choose. This is particularly true of teens; being so young, I feel as though youth display a naiveté, which transcends ordinary limitations of money and time. In the end, I hope that other teens will be inspired by the journey I undertook with my work and the knowledge that anything is possible.”